Adiponectin (ADPN) prevents the development/recurrence of cardiovascular events via its anti-atherogenic effects. However, few long-term studies have examined the changes in serum ADPN levels and arterial calcification seen in renal allograft recipients.

The effects of the serum ADPN level on arterial calcification were examined in 51 Japanese renal allograft recipients. Abdominal aorta calcification was evaluated on computed tomography using the aortic calcification area index (ACAI). The change in the ACAI and serum high-molecular-weight (HMW) - ADPN fractions were studied over an 8-year period. The arterial expression of ADPN, ADPN receptors (AdipoR)1 and 2, and T-cadherin (cadherin-13) were also examined by immunohistochemistry.

1) The change in the ACAI were grouped into quartiles and compared with the alterations in the serum levels of each ADPN fraction over an 8-year period. The change in the ACAI was much lower in the patients with highly elevated HMW-ADPN levels.
2) Multiple regression analysis demonstrated that an advanced age at transplant and a history of cardiovascular complications were associated with an increased change in the ACAI, while higher HMW-ADPN concentrations were associated with improvements in the ACAI. Serum HDL-C level was also identified as a positive factor to increase serum HMW-ADPN level.
3) In immunohistochemical examinations, ADPN was detected on CD31-positive arterial endothelial cells from renal allograft biopsy samples. ADPN co-localized with T-cadherin and AdipoR1, but only partially co-localized with AdipoR2.

Both HMW-ADPN and HDL-C might inhibit the progression of vascular calcification by promoting ADPN binding to vascular endothelial cells via T-cadherin and AdipoR in Japanese renal allograft recipients. 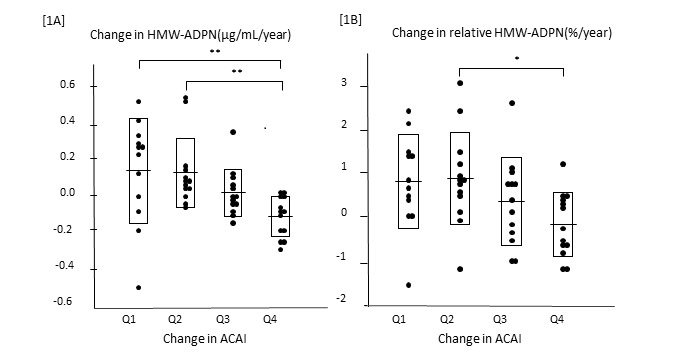