International Comparisons of Mortality Among Hemodialysis Patients in the DOPPS

International Comparisons of Mortality Among Hemodialysis Patients in the DOPPS

Case-mix-adjusted mortality rate among hemodialysis patients has been higher in the US than in Europe or Japan, although this gap has been shrinking. Patient population and clinical practices have changed over time. We are evaluating the effects of case mix, practice patterns, and country factors on mortality rates across countries.

In DOPPS phase 5 data (2012-15) from hemodialysis facilities in Europe, Japan, and North America, Cox models with cumulative covariate adjustment were fitted to estimate adjusted hazard ratios (HR) for death. Case-mix-based propensities for transplantation or change to peritoneal dialysis (PD) were generated using models based on data from the previous DOPPS phase, while within-country general population all-cause and kidney-related death rates were based on WHO data.

The unadjusted death rate in the US was generally comparable to that of many European countries (figure). Adjustment for case mix, especially age and race, results in lower hazard ratios for most European countries compared to the US, while adjustment for skipped treatments and selected practice measures (fistula use, phosphorous levels <6 mg/dl, intra-dialytic weight gain <5.7% of body weight) increased the hazard ratios for these European countries compared to the US, although most were still somewhat below that of the US. Japan Canada had consistently lower adjusted mortality than the US.

Unadjusted mortality in the US is comparable to that of European countries. Case-mix adjustment yields lower hazard ratios in most countries compared to US, indicating outcomes are still worse in US. Adjustment for practice measures substantially attenuates this effect in some countries, indicating that these factors may provide a means for the US to improve its outcomes. Japan has lower mortality in DOPPS data than any other country; this is not explained by any adjustment explored thus far. 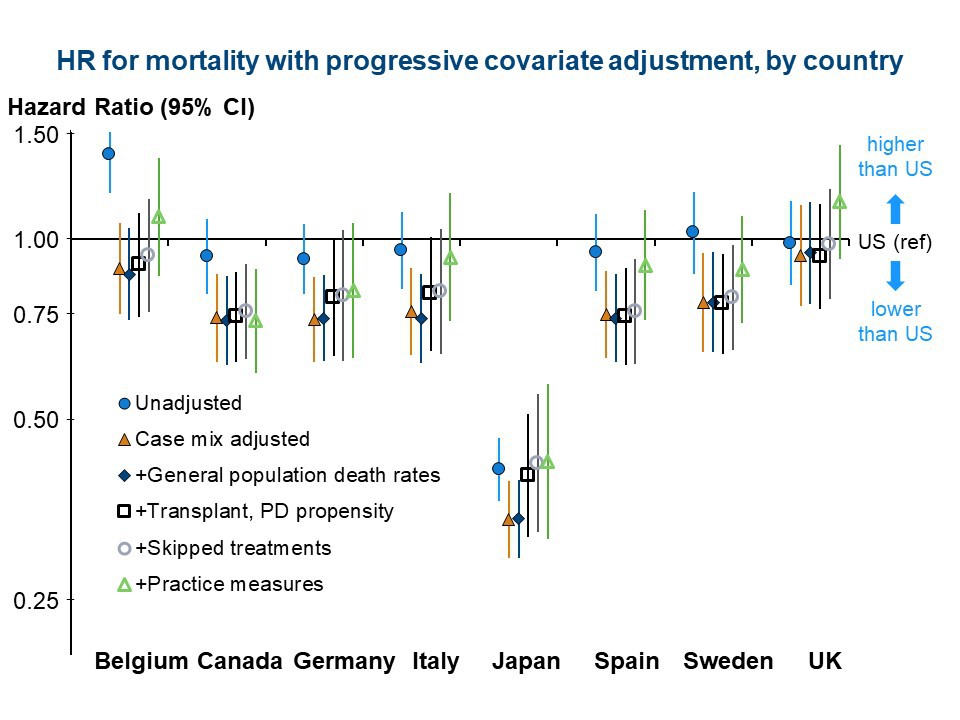