We determined the tradeoff between GFR loss and ACR suppression that could be theoretically tolerated during intensive BP lowering to maintain the same predicted 5-year ESRD risk (based on the mathematical relationship of eGFR and ACR in the KFRE). We then determined the % of participants in African American Study of Kidney Disease and Modification of Diet in Renal Disease (MDRD) trials (two trials of intensive BP lowering) who achieved adequate ACR suppression during intervention. We confirmed that the KFRE predicted risk of ESRD (henceforth KFRE score) at baseline and at 6 mos (after intensification of BP control) both provided good risk discrimination for ESRD.

To maintain the same KFRE score, substantial ACR suppression was needed to counter even small declines in eGFR (Table). For example, a 3 mL/min/1.73 m2 decline in eGFR would require 50% ACR suppression to maintain the same KFRE score. Only 21% of 1523 trial participants had sufficient suppression of ACR that maintained or improved their KFRE score given the large magnitude of eGFR changes that occurred during BP lowering. The KFRE score discriminated risk of ESRD before and after intensive BP lowering well, with C-statistic of 0.85 (strict BP) and 0.87 (usual BP) at baseline, and c=0.88 for both treatment arms at 6 mos. Every 10% worsening of KFRE score predicted higher observed risk of ESRD (HR 1.93 [95% CI 1.66-2.25]) in the strict BP arm.

De-intensification of BP control should be considered when aggressive BP lowering leads to declines in eGFR without sufficiently large corresponding ACR suppression to maintain (or improve) the same predicted ESRD risk by the KFRE. 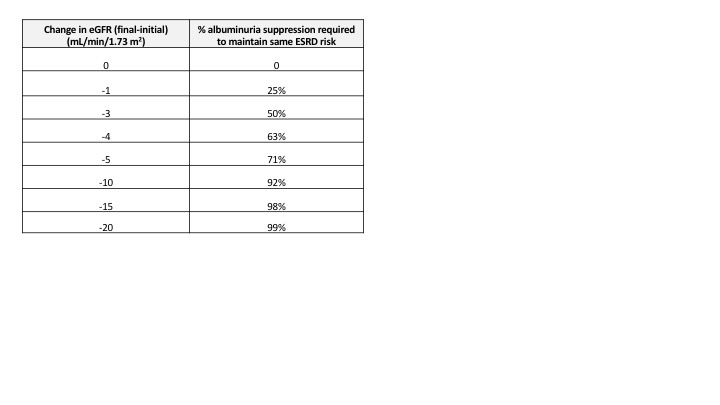