Biomarkers of Kidney Injury and Repair and Risk for Future Kidney Events: The ASSESS-AKI Study

Biomarkers of Kidney Injury and Repair and Risk for Future Kidney Events: The ASSESS-AKI Study

Acute kidney injury (AKI) is a complex disorder associated with increased risk of CKD and mortality. While kidney function may improve after an episode of AKI, subclinical kidney damage may remain that connotes propensity for GFR decline over time. We sought to examine the utility of biomarkers associated with renal injury and repair during and after AKI.

In a prospective longitudinal parallel cohort study, we enrolled 769 adults hospitalized with AKI and 769 hospitalized adults without AKI from 4 centers in North America. Interleukin-18 (IL-18), neutrophil gelatinase-associated lipocalin (NGAL), kidney injury molecule-1 (KIM-1), monocyte chemoattractant protein-1 (MCP-1), uromodulin (UMOD), and YKL-40 were measured in urine samples collected during index hospitalization and outpatient follow-up at 3 months. We followed patients for a median of 4.2 years and assessed the association of the biomarkers with a composite renal outcome (CKD incidence, CKD progression, or ESRD) and death.

Urine biomarkers were detectable at 3 months, suggesting ongoing inflammation, repair, and fibrosis even after clinical AKI has resolved. Biomarker levels at 3 months identify patients at risk for renal events and death. 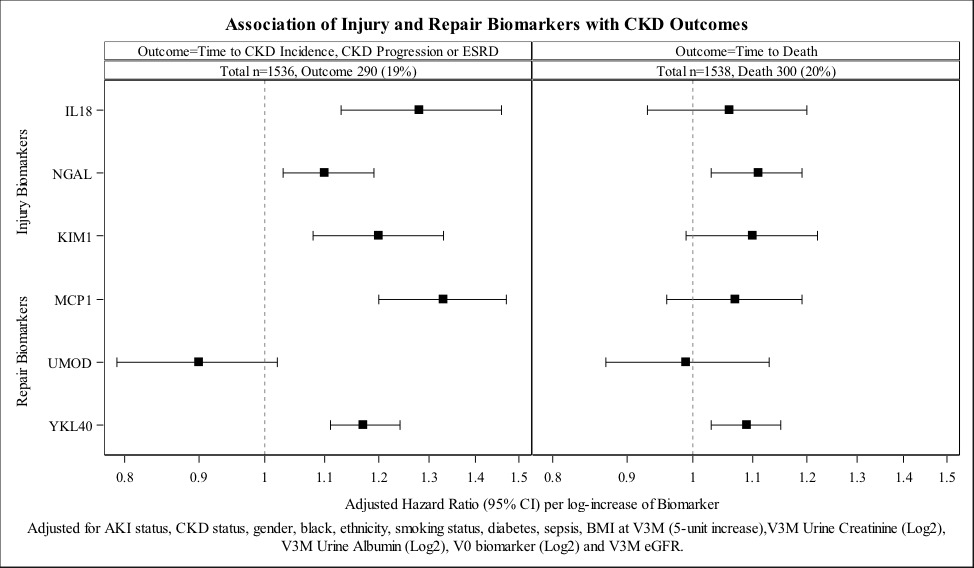