Among 962 participants in the African-American Study of Hypertension and Kidney Disease (AASK) and 670 participants in the Modification of Diet in Renal Disease (MDRD) Study, we evaluated the cross-sectional association between log-transformed urine protein-to-creatinine ratio (UPCR) and known, non-drug metabolites (N =801) identified in stored serum samples (pre-randomization visit in AASK and 12-month follow-up visit in MDRD) via an untargeted approach. The metabolites with statistically significant associations (adjusted for age, sex, race, trial arm, measured GFR, history of heart disease, smoking, and BMI) after Bonferroni correction were included in a pathway analysis.

In AASK and MDRD, respectively, median UPCR was 80 (IQR: 28-359) and 185 (IQR: 54-894) mg/g, mean age was 56 and 53, 39% were female, 100% and 7% were black, 0% and 5% were diabetic, and mean GFR was 48 and 28 mL/min/1.73m2. Linear regression identified 64 metabolites associated with proteinuria in one or both cohorts, 55 of which were statistically significant in meta-analysis (p<8x10-4). There were moderate within-pathway correlations among these metabolites (Figure). Metabolites with the lowest p-values (p<10-17) included 4-hydroxychlorthalonil, 1,5-anhydroglucitol (1,5-AG), perfluoroctanesulfonic acid (PFOS), and 3-carboxy-4-methyl-5-propyl-2-furanpropanoate (CMPF), all of which negatively associated with UPCR. Pathway analysis showed over-representation of metabolites in the phosphatidylethanolamine (PE) and phosphatidylinositol (PI) pathways.

Metabolomic profiling identified metabolites (including 1,5-AG, CMPF and chemicals such as hydroxychlorthalonil and PFOS), as well as metabolic pathways (such as PE and PI metabolism), that were strongly associated with non-nephrotic range proteinuria in CKD. 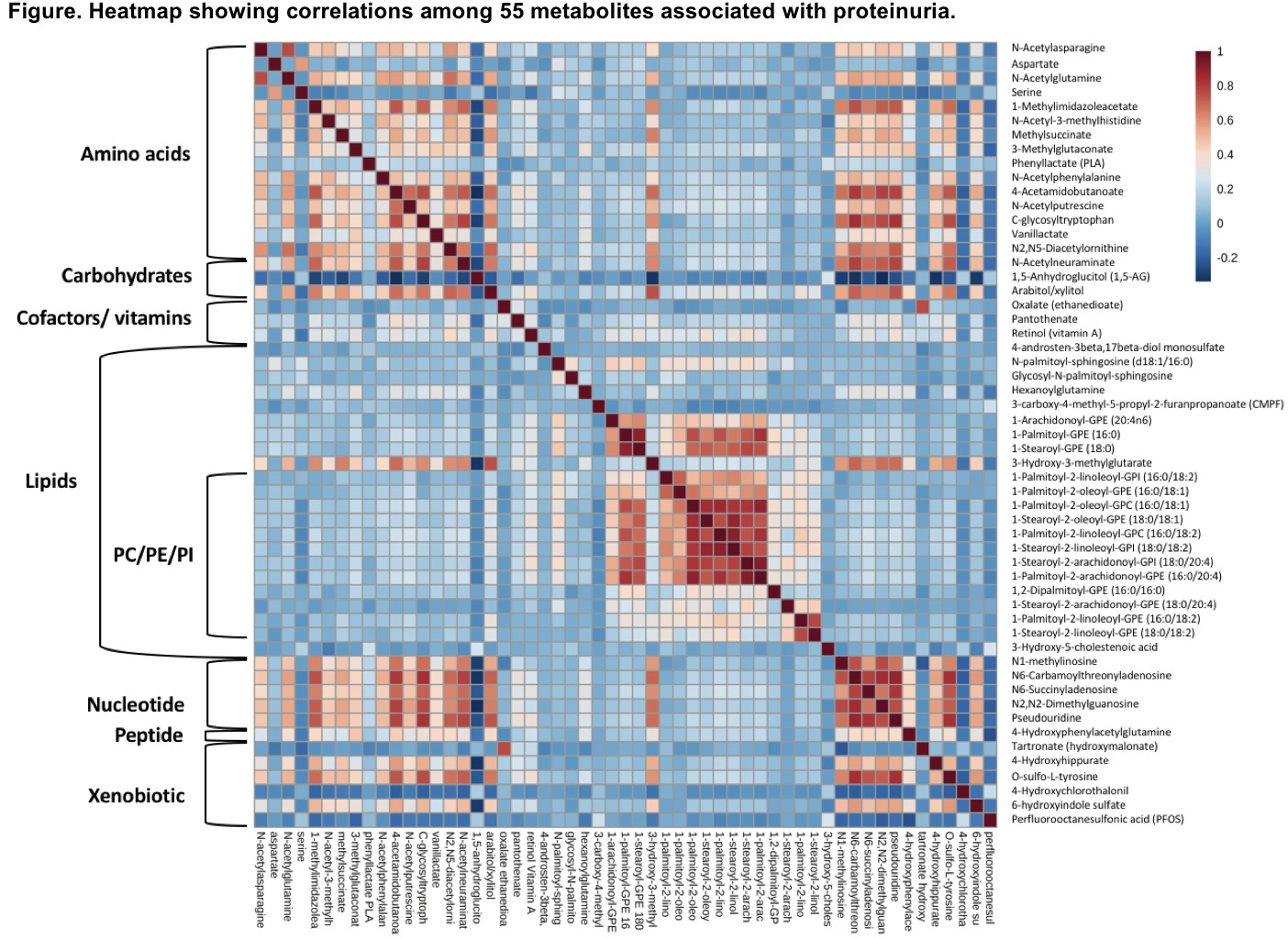