What Is the Sufficient Minimum Number of Glomeruli in a Kidney Biopsy to Detect Nephrosclerosis?

What Is the Sufficient Minimum Number of Glomeruli in a Kidney Biopsy to Detect Nephrosclerosis?

The number of glomeruli present is often used to determine the sufficiency of a kidney biopsy sample (e.g., at least 10 glomeruli). The assumption is that with fewer glomeruli, the biopsy findings are too imprecise to draw inferences regarding the underlying pathology in the kidney. The true amount of nephrosclerosis (global glomerulosclerosis, fibrosis, and arteriosclerosis) is expected to not depend on the number of glomeruli of the biopsy.

We studied 2,915 implantation needle core kidney biopsies from living kidney donors at three transplant centers. The number of glomeruli, the % globally sclerotic glomeruli (%GSG), the amount of interstitial fibrosis (number of fibrosis foci), and the severity of arteriosclerosis (% intimal narrowing) were quantified on digital images of a single PAS-stained section. A beta-binomial model was used to estimate the mean whole-kidney %GSG and the biological (between-kidney) variability in %GSG, number of fibrosis foci, and %intimal narrowing for the number of glomeruli on the biopsy section.

Fewer glomeruli on biopsy correlated with both a higher mean %GSG
(16% increase per 10 fewer glomeruli) and more between-patient variability in %GSG in the kidney (See figure). Because of this, the probability of the whole kidney having %GSG >10% with the biopsy %GSG>10% was 45% with 1-9 glomeruli and 31% with 10 or more glomeruli. Similar findings were seen for interstitial fibrosis and arteriosclerosis.

A lower number of total glomeruli correlated with increasing nephrosclerosis and is consistent with the concept of nephron dropout/decreased cortical volume. The presence of fewer glomeruli on a kidney biopsy is itself informative of pathology and is not always indicative of an inadequate sample. It also may represent cortical scarring and volume loss. Thus, requiring a minimum acceptable number of glomeruli should be applied cautiously when interpreting renal biopsies. 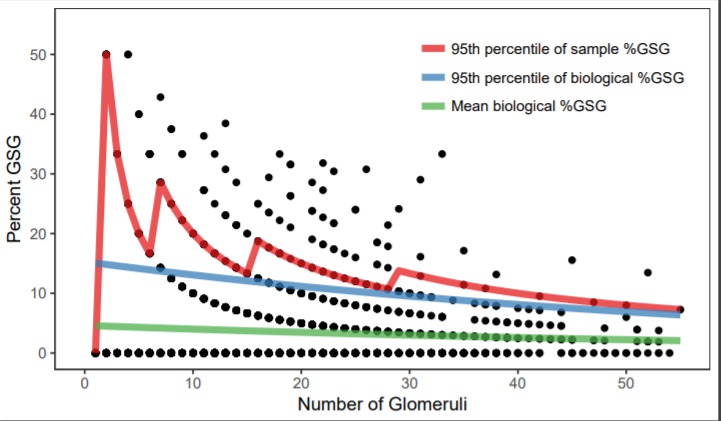