Quantification of serum free light chains (FLC) is reported to be highly sensitive for diagnosis of primary systemic amyloidosis, with reported sensitivities of 90-100%. Although tissue diagnosis remains the gold standard for establishing definitive diagnosis, normal FLC ratios are often interpreted clinically as effectively ruling out amyloidosis. The aim of this study is to examine if our experience is different from the reported literature.

All patients who had serum FLC quantification and bone marrow biopsy at Loyola University Medical Center between the years 2007-2017 were analyzed in a retrospective chart review. A total of 1,270 patients were identified and 51 had a confirmed diagnosis of AL-amyloidosis. A FLC ratio of 0.26-1.65 was considered normal, consistent with past studies. Reported p-values were determined using a chi-squared test.

When amyloidosis is clinically suspected, serum FLC quantification may be insufficient to rule out the diagnosis, leaving biopsy of affected organ(s) as the prevailing gold standard. 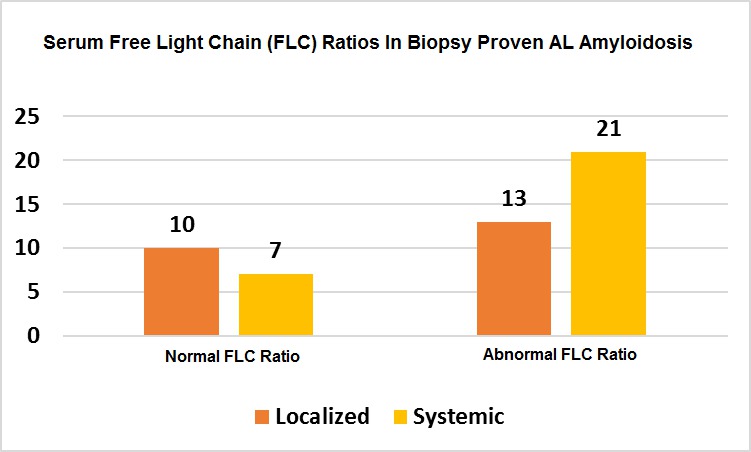