Peritonitis is a serious complication in peritoneal dialysis (PD) and associated with significant morbidity and mortality. Diagnostic criteria include turbid effluent with >100 leukocytes/µl, abdominal pain, and a positive culture. Since accurate diagnosis and a short time-to-treatment are essential for therapy success, we developed a smartphone-based system to measure turbidity in PD fluid. Its use was evaluated in the settings of continuous ambulatory PD (CAPD) and continuous cycling PD (CCPD).

Total cells of one normal PD effluent were isolated, concentrated, and characterized by count, differential, Wright-Giemsa staining, and flow cytometry. PD effluent was spiked with known amounts of cells isolated from the PD effluent ranging from 5 to 90 leukocytes/µl. Solutions were analyzed in a cuvette (CAPD setup) or pumped through a drain line at 100 ml/min (CCPD setup). Turbidity was measured using the light sensor of a commercially available smartphone. An app (developed in-house) recorded illuminance in real time.

PD effluent contained a total of 159 cells/µl of which 94.4% were red blood cells, 2.5 % leukocytes and 3.1% platelets. The differential showed 7.7% neutrophils, 71% lymphocytes, 18.7% monocytes, 0.8% eosinophils and 1.8% basophils. The PD effluent cell population was confirmed by Wright-Giemsa stain. Flow cytometry showed 20% peritoneal debris. Using the light sensor of the smartphone, a decrease in illuminance was detected with increasing cell concentration. At 90 leukocytes/µl, illuminance was decreased by 15% and 13% in CAPD and CCPD, respectively. The figure exemplifies the tight relationship between cell concentration in the PD effluent and illuminance in the CCPD setting.

A sensitive method to detect an increase of leukocytes in PD effluent was developed. This smartphone-based approach may aid in earlier detection of peritonitis in PD patients since even minor cloudiness can be measured. 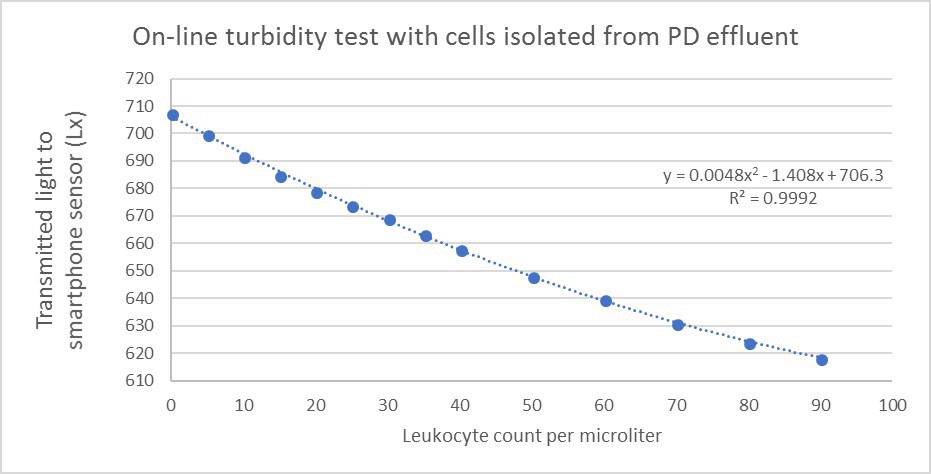 Relationship between cell concentration in the PD effluent and illuminance.