This was a 24-month (M), randomized, Phase III, double-blind study with long-term extension. Patients (pts) were randomized to pbo or IV ABA every 4 wks on background of MMF + corticosteroids (CS). Primary endpoint: complete response (CR; UPCR ≤0.5, preserved eGFR, no cellular casts, CS ≤10 mg/day) at Year (Yr) 1. We report all blinded data up to Yr 3 of tx.

The study failed to meet its primary endpoint. Up to 3 yrs of tx, abatacept-treated pts had more rapid improvement in proteinuria, which led to earlier, sustained CR with a favorable safety profile.
Writing assistance provided by Caudex. 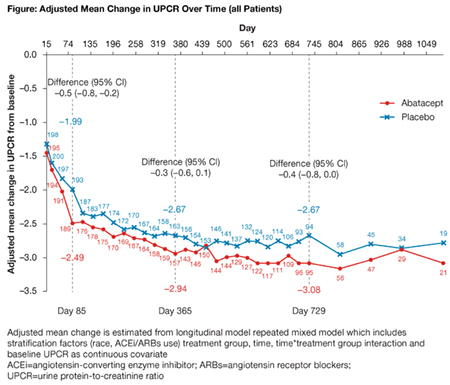