Kidney transplant recipients with history of native kidney glomerulonephritis (GN) are at increased risk of graft loss from recurrent GN. It is unclear if steroid maintenance could help in preventing recurrent disease and improve outcomes in these patients.

Using the United Network for Organ Sharing database, we identified adult kidney-only transplant recipients from 2001-2015, who had GN as cause of ESRD, who received induction therapy and were discharged on calcineurin inhibitor/mycophenolic acid with steroid maintenance (SM), n=14,610 or steroid withdrawal(SW), n=6, 406. Using a multivariate Cox-model adjusting for donor, transplant and recipient related factors, overall and death censored graft failure rates and patient death rates were compared between the SM and SW groups in patients with GN .

Despite a presumed potential benefit of steroid maintenance in reducing the risk for recurrent post-transplant GN, our study found increased risk for death with functioning graft associated with steroid use in KTRs with history of native kidney GN who received peri-operative induction followed by CNI/MMF maintenance.This could be a consequence of enhanced cumulative immunosuppression since these patients were likely exposed to prior immunosuppressive therapy for native kidney GN. Limitations are retrospective study design and possibility of residual confounding. 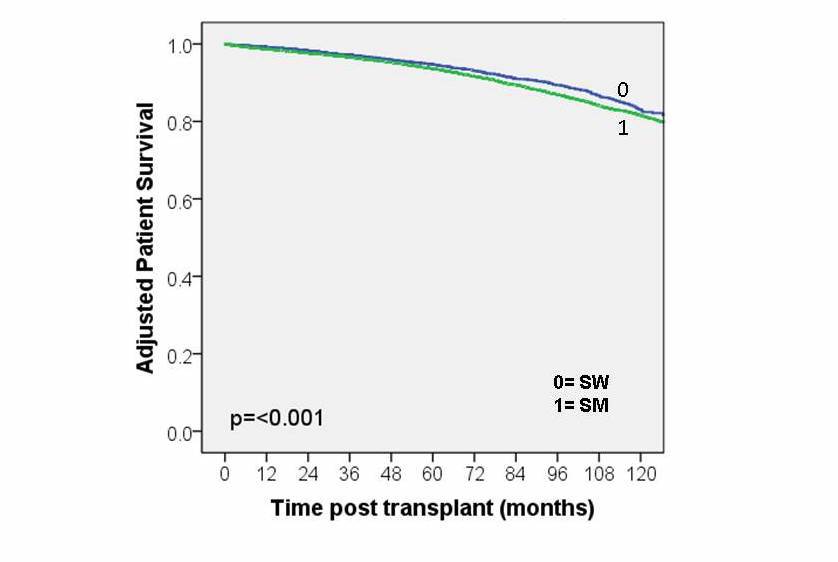