HIF stabilizer is a novel drug for renal anemia. Previous clinical trials have demonstrated HIF stabilizer could elevate hemoglobin (Hb) levels effectively in CKD patients. As a critical transcription factor, HIF has been involved in regulating hundreds of genes, which raised too much concern by clinician for its potential adverse effect. Here we firstly demonstrated the dose dependent biphasic effect of MK-8617(HIF stabilizer, Selleck) on renal fibrosis.

Hb level was significantly elevated in all three groups with MK-8617 treatment for 12 weeks compared with that in Ctrl group. However, Hb level in group C was lower than that of the other two groups. Compared with the Ctrl group, the Scr and BUN were significantly decreased in group A and B respectively. It is of note that there was no significant reduction of Scr and BUN in group C. The VEGF mRNA and protein expression were significantly increased in both remnant kidney and liver in mice with Group C, but not in group A & B. However, the number of glomerular endothelial cells was significantly decreased in group C. More impressively, mice in group C showed a serious renal fibrosis with macrophage infiltration, but in contrast, mice in group A & B showed the attenuation of renal fibrosis compared to the Ctrl group. Furthermore, we identified there was a transdifferention of macrophage to myofibroblast in group C.

Although the significant improvement of renal anemia with MK-8617 in 5/6Nx mice, the dose dependent biphasic effect on renal fibrosis has been found, which implied that cautious should be taken when long term use this kind of drug to treat renal anemia, specifically when the dose is high. And the exact mechanism is also to be clarified. 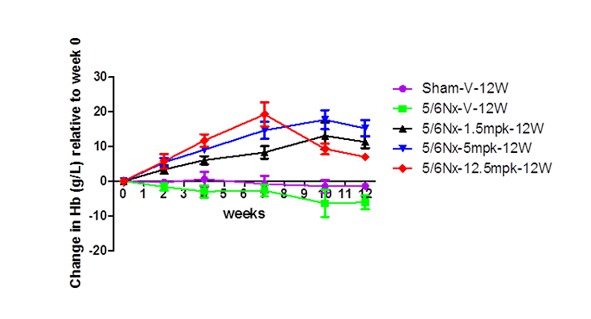