In ACCORD, 48% of those randomized to fenofibrate demonstrated a ≥20% increase in the concentration of serum creatinine within 4 months, a finding consistent with other trials. The effect of fibrates on markers of kidney tubular injury is unknown.

We obtained stored urine samples from a subgroup of 571 ACCORD participants randomized to either placebo (n= 329) or fenofibrate (n=242) where all patients also received statins. Our outcome was 2-year changes in the concentration of two urine biomarkers of injury: kidney injury molecule-1 (KIM-1), interleukin-18 (IL-18), and 2 urine biomarkers of repair: YKL-40 and monocyte chemoattractant protein (MCP-1), along with the changes in eGFR and urine albumin to creatinine ratios (UACR) measured from random samples. We adjusted for clinical variables and randomization arm and compared the changes in the markers via analysis of covariance (ANCOVA).

Baseline clinical characteristics and measures of eGFR (88 ml/min/1.73m2), UACR (12 mcg/mg), and all 4 biomarkers were similar in the 2 groups. At 24 months, eGFR was 14.2 ml/min/1.73m2 lower with fenofibrate vs. placebo and serum creatinine was 0.18 mg/dl higher. In contrast, UACR and all 4 urine biomarkers of kidney injury or repair were similar or decreased from baseline in fenofibrate vs. placebo (Figure). In a stratified analysis, even participants with the highest quintile 24-month decrements in eGFR with fenofibrate (-30.4 to -73.5 ml/min/1.73 m2) still had lower or unchanged UACR and urine biomarkers.

These findings indicate the increase in the concentration serum creatinine with fibrates is not due to intrinsic damage to kidney tubule cells. 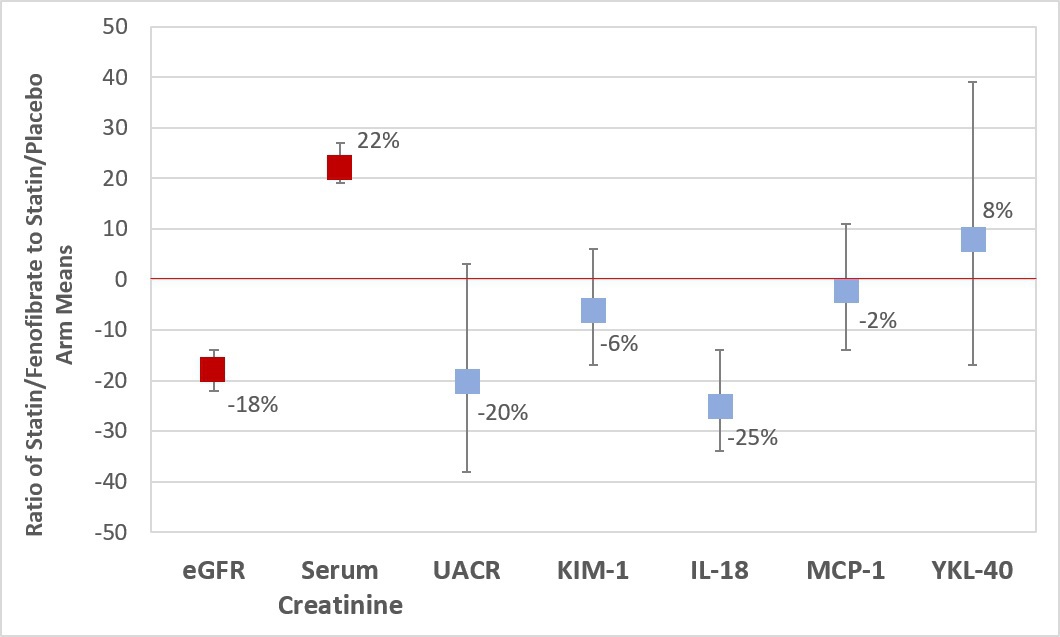 24-month change in eGFR, Serum Creatinine, UACR and Urinary Kidney Injury and Repair Biomarkers in ACCORD Participants Randomized to Fibrates vs. Placebo