A Unique Treatment Strategy in Collapsing Glomerulopathy in a Native Kidney

A Unique Treatment Strategy in Collapsing Glomerulopathy in a Native Kidney

Collapsing glomerulopathy (CGP) is a fast progressive glomerular disease. We present a unique case of CGP in a native kidney that responded to multi-drug therapy, which included therapeutic plasma exchange (TPE) leading to complete remission.

A 62 year old Indian male presented in June 2017 with AKI (2.65 mg/dl), and nephrotic syndrome (5.6g/24hours). His initial presentation prompted a kidney biopsy which revealed CGP with minimal fibrosis. The patient was started on steroid therapy and ARB therapy. The patient however continued to progress and tacrolimus was added to the regimen. His proteinuria worsened to 32.5g. The patient was subsequently re-biopsied. The biopsy revealed CGP with minimal IFTA. All of his secondary work-up for autoimmune, viral and cancer causes was negative. A combination therapy approach was used and the patient was then initiated on TPE, MMF and continued to tacrolimus (Figure). Steroids were tapered off. Interestingly, with only a few sessions of TPE, his proteinuria improved to <3gm. When TPE was halted, proteinuria returned. This prompted re-initiation of TPE. The patient subsequently had a progressive decrease in proteinuria down to <2gm over 2-3 months. He was maintained on MMF and tacrolimus. In an attempt to come off TPE, he was given a dose of rituximab 1gm and then started on supplemental powder of galactose 0.2 g/kg orally two times per day. After 2 months of therapy he is off TPE and his creatinine stable at 1.2mg/dl with 0.3g proteinuria.

This case report suggests that administration of a multimodality approach as used in kidney transplant patients with recurrent CGP might be useful in native kidney idiopathic CGP. This novel case report findings support the performance of randomized clinical trials to assess the efficacy of the use of multi-modal approach to idiopathic CGP. 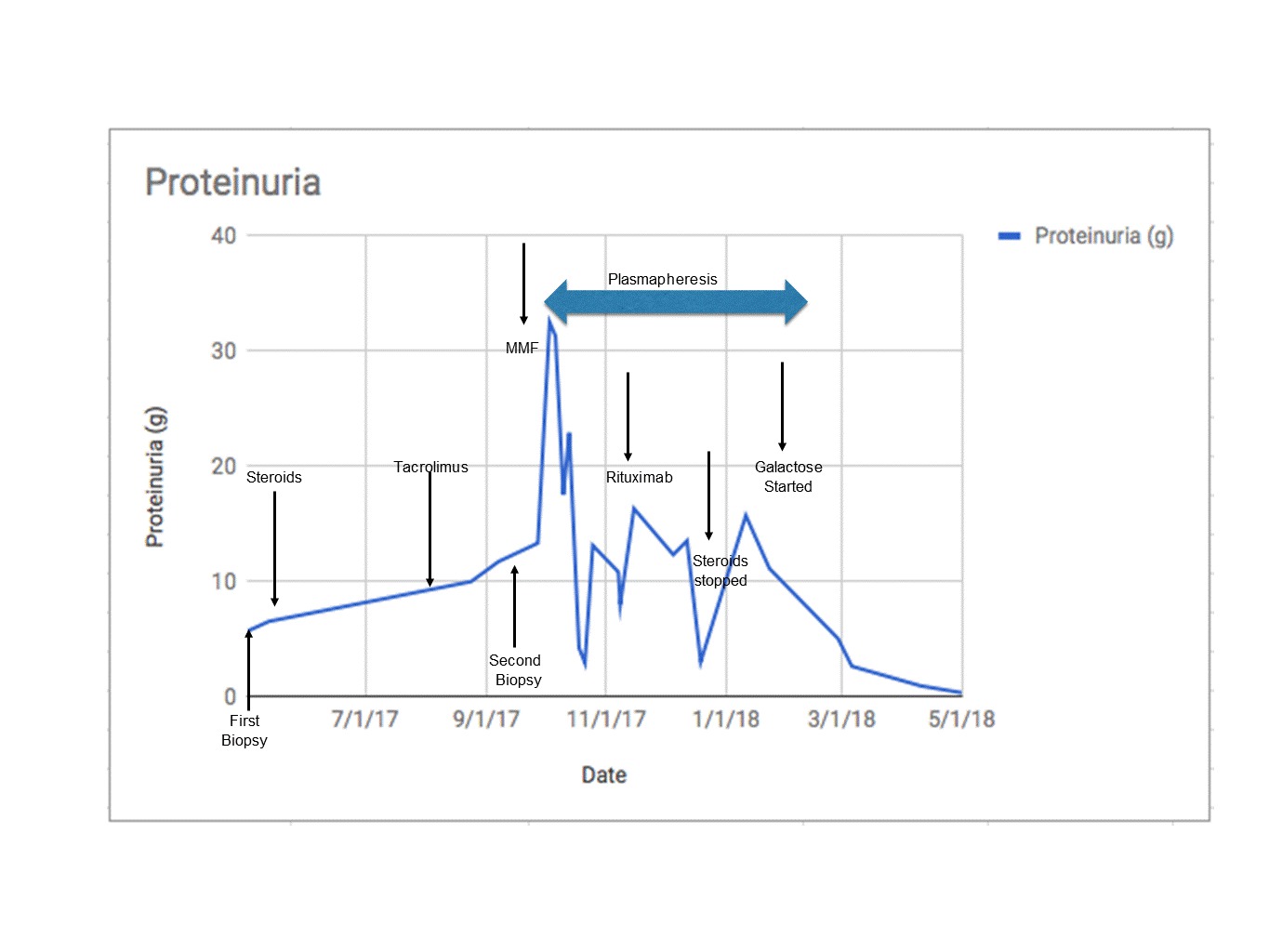