Variability of Pre-Dialysis Serum Sodium, a Risk Factor of Survival in Hemodialysis Patients: Results from the Global MONDO Initiative

Variability of Pre-Dialysis Serum Sodium, a Risk Factor of Survival in Hemodialysis Patients: Results from the Global MONDO Initiative

All adult incident pts with more than 5 SNas during the first year on HD were included, outcomes were recorded over a 2 yrs period. Average baseline SNa as well as variabilities were computed by standard deviation (SD) of the residual, SD, relative range (the difference between the largest and smallest), average real variability (ARV). Cox proportional models with bivariate spline functions were applied to study the joint effects of SD of residual, SD, ARV and relative range of SNa, respectively. Cox proportional models with multiple adjustments were also used to further evaluate the adverse effect of SNa variability.

Out of 30,174 pts (EU:15,660, Asia:8,749,US:2,691,UK:2,282, South America:791) were included, 7,021 (23.3%) died. Hyponatremia (SNa<=135) was the most prominent predictor of increase mortality. For pts with SNa>135, we didn't observe an association between SD residual and mortality. Increased risk of death with higher SD and ARV appeared to be present at all levels of SNa. A more pronounced effect of relative range was observed compared to SD and ARV. More significant effect was observed with the maximal SNa happened before the minimal SNa [Figure 1]. Cox proportional model with adjustments also yield the same results.

Given the positive association between mortality and hiher SNa range,S, ARV regardless of the SNa level, these measures constitute novel prognostic indicators in HD therapy. 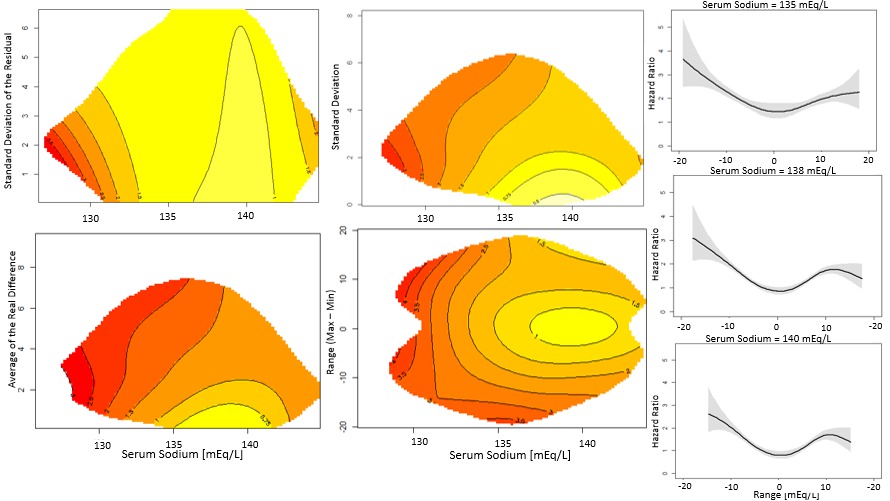