The effects of nephrectomy on blood pressure (BP) and renal function in kidney donors with hypertension (HTN) and white coat HTN are unclear. This study is a pilot of a planned larger project aimed at investigating this in UK kidney donor population.

Living donors with HTN and white-coat HTN (BP >140/90 but normal ABPM) between January 2010 to December 2014 were identified. Matched normotensive donors were chosen as controls.

There was no significant difference in percentage reduction of eGFR post-donation across all donor groups (Figure 1).

No donor had proteinuria pre-donation. Post-donation, donors with normal BP and white coat HTN did not develop proteinuria. However 20% donors in HTN group developed proteinuria.

There was no significant difference in change in renal function across all 3 groups. Our observations of higher incidence of proteinuria and uptitration of BP medications in donors with HTN, and significant proportion of donors with white coat HTN requiring antihypertensive medications post-donation merits further investigation. Our future work will investigate the impact of pre-donation HTN and white coat HTN on renal function and cardiovascular health in a large cohort of kidney donors. 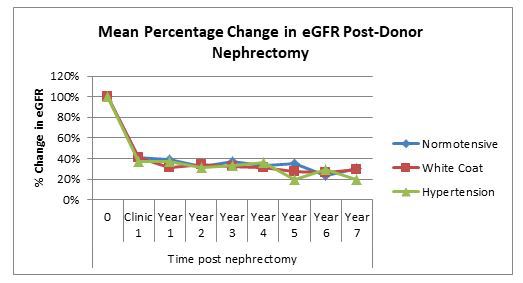