Renal disease is extemely rare in pregnancy but presents a therapeutic dilemma when diagnosed. It is a poor prognostic marker for fetal and maternal health. There is limited data and recommendations to guide therapy in this subset of population are lacking. We report our experience with 19 pregnant patients undergoing renal biopsies over a period of 5 years.

All pregnant patients undergoing renal biopsy at our facility were included in this retrospective analysis. Electronic medical records of
nephrology, obsterician services and histo-pathological reports were accessed. Patient confidentiality was preserved. Data was collected from january 1, 2013 to april 30, 2018.

Nephrotic syndrome was the most common indication for a renal biopsy during pregnancy accounting for 16/19 patients (84%). Lupus nephritis was diagnosed in 4/18 patients necessitating an immunosuppressive regimen. The median gestation was 32 weeks (range 20–40) with loss of two fetuses. Non diabetic patients with nephrotic syndrome were at a higher risk for pre ecclampsia than diabetic patients with nephrotic syndrome (p<0.05). Three patients progressed to end stage renal failure needing dialysis, there were no maternal deaths during the follow up period. Table 1 shows characteristic features of this group.

Our series of selected pregnant patients undergoing renal biopsy demonstrates the variety of pathology in this group. Ante partum renal biopsy is safe in early pregnancy but should be considered only if there is a high likelihood to alter conventional therapy, and aid progression of pregnancy to fetal viability. Close monitoring and early intervention is key to improving feto-maternal outcomes particularly in non diabetic patients with neprhotic syndrome. 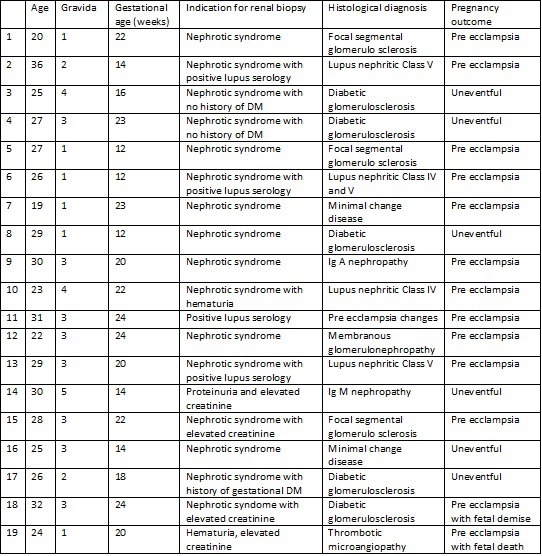