Oral Bisphosphonate Use and Renal Function Decline in Patients with CKD

Oral Bisphosphonate Use and Renal Function Decline in Patients with CKD

Oral bisphosphonates (BP) are contraindicated in patients with moderate-severe chronic kidney disease (CKD) due to concerns regarding their effects on renal function. The aim of this study was to assess the effect of BP use on CKD stage worsening and annual changes in estimated glomerular filtration rate (eGFR) over time.

Patients aged 40+ with an eGFR<45 in UK primary care (CPRD) linked to hospital records. Followed for up to 10 years. BP users censored 210 days after the last BP prescription. Unexposed patients could become exposed; 10-year follow up re-started.
Users were matched to up to 5 non-users using propensity scores (PS), stratified by the number of years of follow-up. Cox regression was used to estimate the hazard ratio (HR) of stage worsening. The rates of annual eGFR changes were estimated by the slopes of a mixed effect model with cubic splines and an interaction between BP use and time.

BP use has a 70% higher likelihood of worsening in CKD stages. Further research is needed to understand the longitudinal changes in eGFR trajectories. 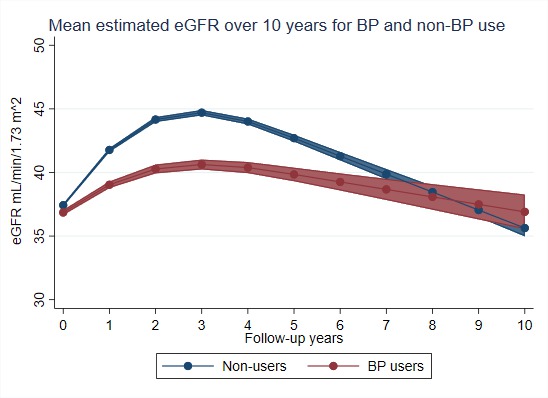