A recent trend in donor demographics has led to transplantation of organs from donors with increasing age and comorbidities in the UK. In view of this changing climate, individual assessment of kidneys offers is increasingly important.

Data from the UK Transplant Registry held by National Health Service Blood and Transplant (NHSBT) were analysed. Offers made to adult patients through the National Kidney Allocation Scheme (NKAS) from donation after brain-death (DBD) donors between 1 January 2010 and 31 December 2014 were included. A cohort of 5,973 offers was identified, excluding offers made via the UK fast track scheme and those leading to dual or en bloc transplants. Only kidneys declined for donor-specific reasons were examined.

There was a large variation in offer decline rates between centres across the UK, ranging from 17% to 54%. ‘Donor unsuitable - past medical history’ was the most common reason for decline. Comparisons were made for kidneys that were declined, subsequently transplanted elsewhere, and remained ‘functioning ’ (as defined as patients with an eGFR > 20 at 12months) and stratified by centre (Figure 1). There was some disparity between centres however no significant outliers were identified.

Centre specific outcomes of patients on the waiting list for whom kidney offers were declined, where the kidney was subsequently transplanted (n=976) in another patient and remained functioning , were also analysed. In this cohort, up to 9% of patients were removed from the transplant waiting list due to clinical deterioration and mortality was up to 15% for each centre.

There is variation in donor-specific decline rates across centres in the UK which could reflect a disparity in ‘risk-appetite’ amongst clinicians. Approximately 75% of declined DBD kidney offers that are transplanted elsewhere have >20 at 12 months. Mortality and morbidity of patients who remain on the waiting list is high. Better means of assessing donor risk are needed due to a high decline rate of these organs. 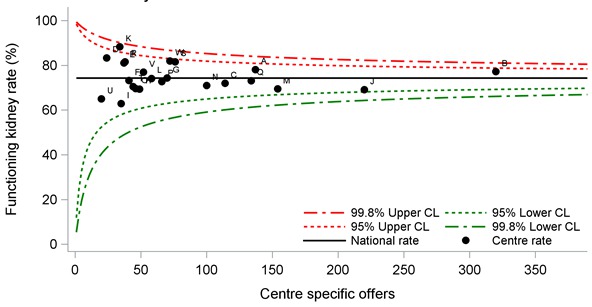