We conducted a retrospective study using linked databases in Alberta, Canada to follow living kidney donors from 2002 to 2014. We determined the proportion of donors who had an annual outpatient physician visit and laboratory measurements for serum creatinine and albuminuria.

There were 534 living kidney donors with a median follow-up of 7 years (maximum 13 years). The median age at the time of donation was 41 years and 62% were female. Overall, 25% of donors had all three markers of care (physician visit, serum creatinine, albuminuria measurement) in each year of follow-up. Adherence to physician visits was higher than serum creatinine or albuminuria measurements (67% vs. 31% vs. 28% of donors, respectively). Donors with guideline-concordant care were more likely to be older, reside closer to the transplant center, and receive their nephrectomy in more recent years.

These findings suggest significant evidence-practice gaps, in that the majority of donors saw a physician, but the minority had measurements of kidney function or albuminuria. Future interventions should target improving follow-up care for all donors. 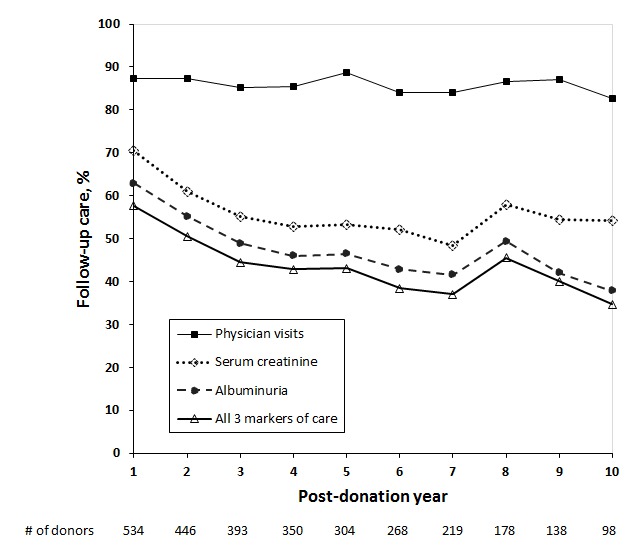 Proportion of donors who have evidence of follow-up care during each post-donation year.