The CKiD study is a prospective cohort study that enrolled patients 1–16 yrs with an eGFR of 30–90 mL/minute/1.73 m2. Clinical and laboratory data, including GFR, are collected annually. Latent class mixed model was used to identify GFR trajectories. Multinomial logistic regression was used to study patient characteristics associated with each trajectory.

888 patients were included. Among nonglomerular patients (613), we observed 4 GFR trajectories: 35 with median baseline GFR/no decline; 327 with high baseline GFR/slow decline; 231 with low baseline GFR/slow decline and 20 with high baseline GFR/rapid decline (Figure 1, class 1 to 4 respectively). Known risk factors of progression differed between trajectories. The proportion of girls was higher in the group with stable GFR (57%) than in other groups (32-35%). Patients with stable GFR had lower prevalence of acidosis, anemia and proteinuria. Female gender remained associated with the absence of progression (OR 2.7 [1.3-5.5]) after adjusting for other risk factors. This effect remained after stratification on pubertal status. Among glomerular patients (275), progression was mostly related to the underlying glomerulopathy.

The slower progression in girls is driven by a subgroup with nonglomerular diseases and stable GFR. The effect of gender seems independent of pubertal status, arguing against a direct effect of sex hormone to explain gender disparity in CKD progression. 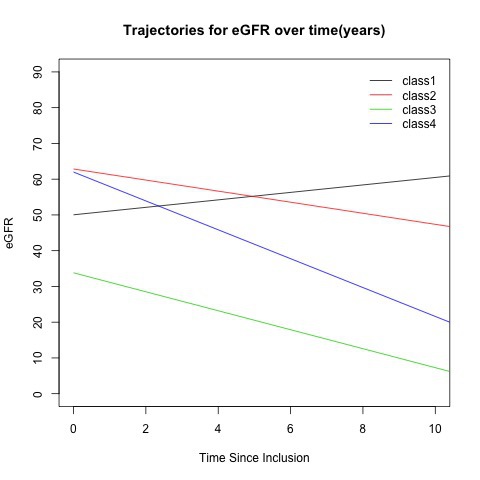