While health-related quality of life (HRQOL) has been increasingly recognized as a strong predictor of mortality among hemodialysis (HD) patients, differences in these associations across diverse racial/ethnic groups have not been thoroughly investigated.

We examined the relationship between HRQOL and mortality among a prospective cohort of racially/ethnically diverse HD patients recruited across 18 dialysis units over 2011-16. Using Short Form 36 (SF36) surveys administered every 6 months, HRQOL was ascertained by 36 questions summarized as 2 physical and mental health dimension and 8 subscale scores. Associations of time-varying SF36 scores with all-cause mortality were estimated using multivariable Cox models in the overall cohort and within racial/ethnic subgroups.

Lower self-reported HRQOL scores, particularly related to impaired physical health dimension and subscales, were associated with higher mortality in HD patients, including those of minority background. Further studies are needed to determine whether interventions that augment physical function improve the survival of these diverse populations. 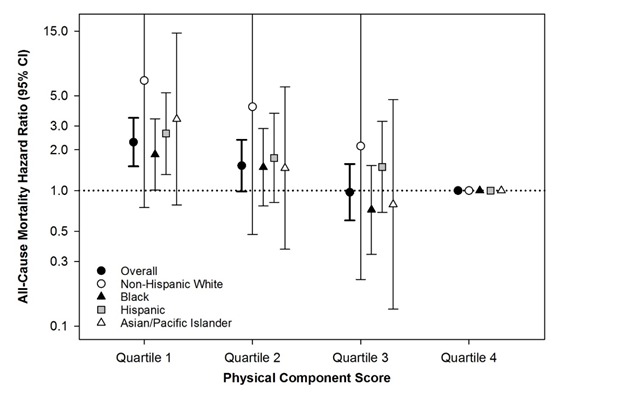