Mastocytosis of the Kidney: A Rare Manifestation of Systemic Mastocytosis

Mastocytosis of the Kidney: A Rare Manifestation of Systemic Mastocytosis

Systemic mastocytosis (SM), a rare, progressive myeloproliferative neoplasm, is characterized by clonal mast cell infiltration into tissues. Renal involvement of SM is unusual, with only three case reports currently described in the literature, and carries a grim prognosis.

SM is associated with mutations in the receptor tyrosine kinase KIT (CD117). SM subtypes and median survival range from indolent (16 years) to mastocytoma (2 months). Renal involvement may occur even with indolent SM and has been reported as MPGN, interstitial nephritis, and light chain deposition disease. In each case, the kidney injury was progressive, requiring hemodialysis, and survival was worse than expected despite KIT directed therapy. 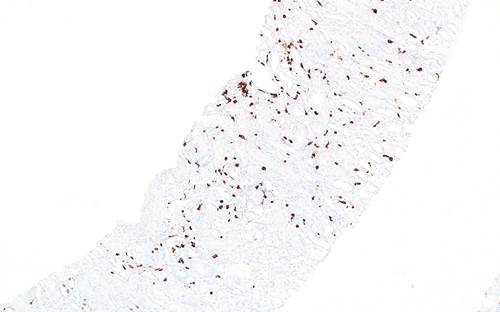