2017 ACC/AHA guideline lowered the numbers for the diagnosis of HT to 130/80 mmHg for adult population with the aim for the early diagnosis of life threatening complications of HT such as heart attack and/ or stroke. Turkey is a developing Euroasian country with the population of 82 million and has dominance of relatively younger age.Although, young population is predominating, cardiovascular disease is still major public health concern in Turkey. In 2003, the first large sample sized (n=4910) epidemiological study (PatenT study) showed the prevalence of HT as 31.8% in Turkey. After nine years, PatenT 2 trial showed prevalence of hypertension as 30.3 %.This study aimed to determine to assess current epidemiology of hypertension including, prevalence, awareness and control rates among Turkish adults, using criteria from the 2017 ACC/AHA guideline and the Seventh Report of the Joint National Committee on Prevention, Detection, Evaluation, and Treatment of High Blood Pressure (JNC7).

We analyzed data from PatenT 2 study (n= 5437). Blood pressure measurements were performed three times and awareness and treatment were assessed by self-reporting and control was defined as SBP/DBP less than 140/90 mmHg.

Compared with the JNC7 guideline, the 2017 ACC/ AHA guideline results in a considerable increase in the prevalence of hypertension and substantial decrease in control rates and awareness of hypertension in Turkish adults. 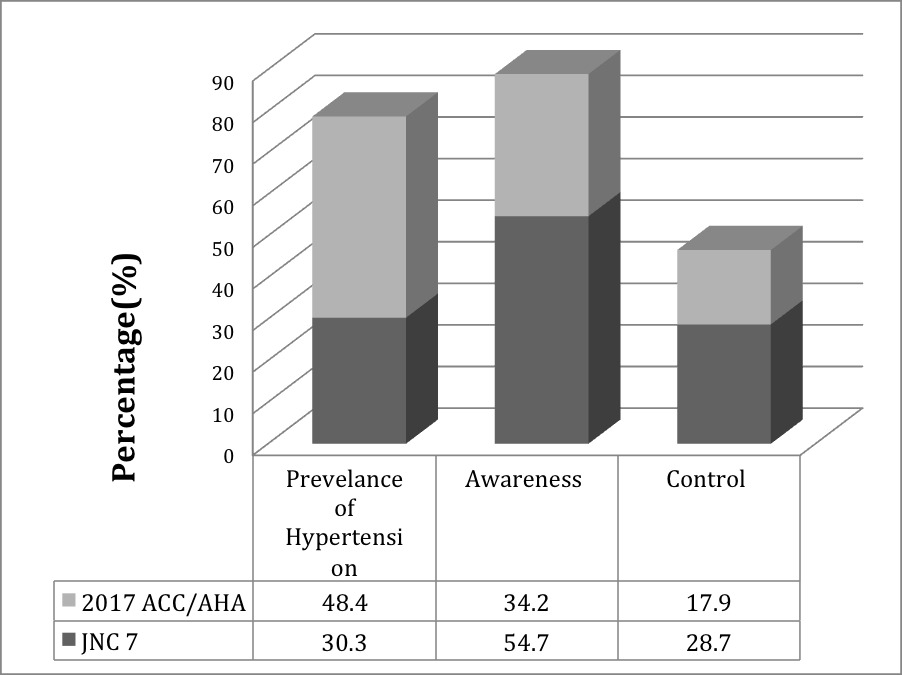