Yersinia pseudotuberculosis, a zoonotic pathogen is known to cause fever, acute gastroenteritis, mesenteric lymphadenitis, or acute kidney injury (AKI). There have been frequent Yersinia infection outbreaks associated with contaminated food and unsterile water ingestion in the past. While it was considered practically eradicated with improvement of public health including control of mountain water cleanness, we experienced several cases with suspected Yersinia infection in 2017.

There were 9 cases suspected of Yersinia infection (Male:Female 6:3, mean age 7.57 years (range 3.01 - 12.18)). Six cases occurred in May and 8 resided in metropolitan Seoul area. Three cases had history of drinking mountain water. All the cases first presented with fever for median 13 days (range 6 - 20), and gastrointestinal symptoms and oliguria followed. Imaging studies revealed mesenteric lymphadenitis, terminal ileum wall thickening, and increased parenchymal echogenicity of kidney. Creatinine levels increased to 3.03 - 9.22 mg/dL. Their urinalysis revealed sterile pyuria, proteinuria, and glycosuria, suggesting interstitial nephritis. Oliguria continued for 4-17 days and one patient required hemodialysis, however, all of them completely recovered from AKI. Rash developed later in four cases, and desquamation was noted in three. Mean disease duration from the onset of fever to discharge was 11.9 days (range 6 - 24). In the diagnostic work-up, Yersinia pseudotubuerculosis was isolated in stool culture in one patient. Anti-Yersinia IgA and IgG were found positivein six patients within three months after the onset of disease, suggesting recent Yersinia infection.

Yersinia pseudotubuerculosis infection is a well-known cause of interstitial nephritis presenting with AKI. When a patient present fever, acute gastroenteritis, fever and AKI, clinician should suspect Yersinia infection. Furthermore, diagnosis of such a case warrants surveillance to identify the infection source and prevent an outbreak. 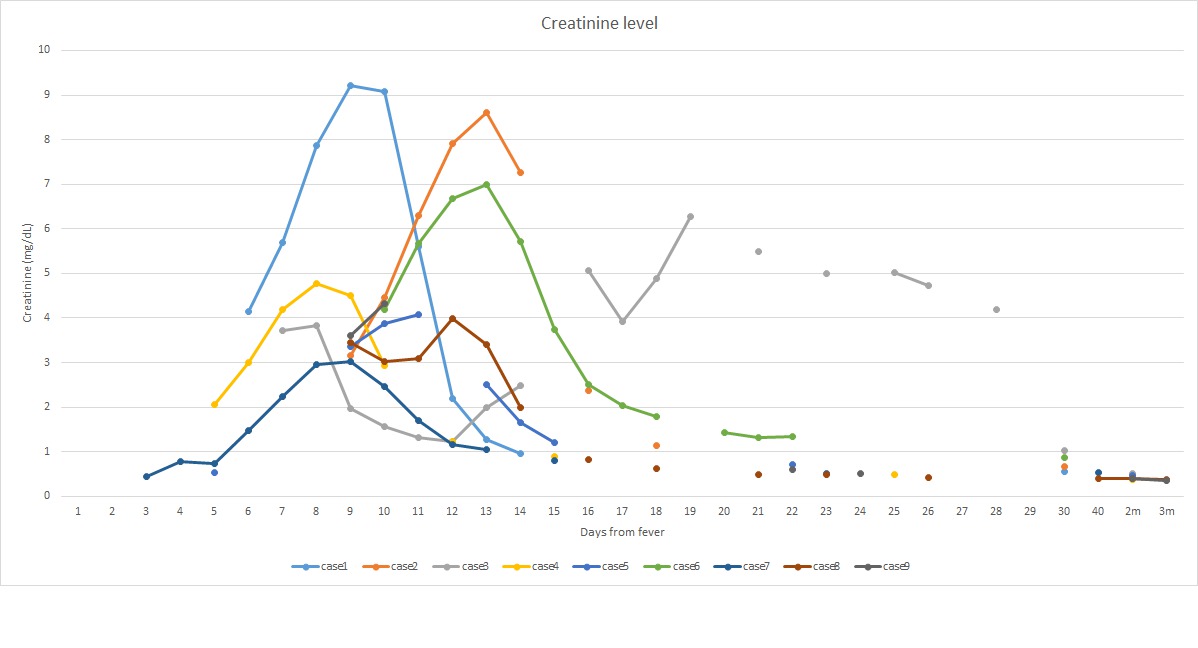