Obstructive uropathy (OU) is the leading cause of pediatric chronic kidney disease (CKD) and end stage renal disease (ESRD). Children who escape the newborn period with mild to moderate CKD continue to be at increased risk for progression, especially as they undergo pubertal changes. The predictive ability of clinical markers throughout childhood is poorly defined in OU.

Patients with OU were identified in the Chronic Kidney Disease in Children Study (CKiD), a prospective observational cohort of children with mild to moderate CKD. The primary outcome of interest was ESRD (Cases). OU patients who did not progress to ESRD during follow-up (Controls) were age matched to Cases. Glomerular Filtration Rate (GFR), urine (protein/Cr and microalbumin/Cr), and serum (CO2, phosphate, albumin, and hemoglobin), were evaluated as predictor variables both at baseline and over time.

Baseline and longitudinal evaluation of clinical measures predicts ESRD in children with mild to moderate CKD from OU. Optimal cutoff values require further evaluation so that children identified at high risk can undergo closer surveillance that may allow changes in management to slow or halt progression. 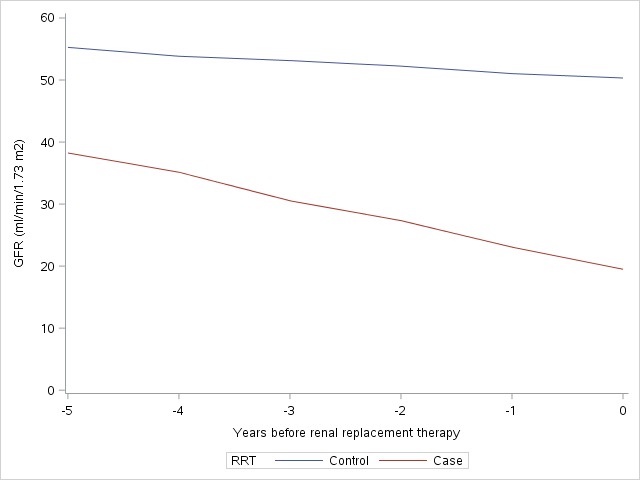 Figure. Estimated change in GFR over time in the CKiD OU cohort