ANCA-Associated Vasculitis Through the Continuum of Age: A Retrospective Chart Review

ANCA-Associated Vasculitis Through the Continuum of Age: A Retrospective Chart Review

ANCA-associated vasculitis (AAV) is a heterogenous group of small-vessel vasculitides that typically affects the kidneys, respiratory tract, and other organ systems. The onset of AAV may occur at any age, although literature suggests that this is more common in the elderly. We aim to characterize the clinical and laboratory manifestations of AAV based on age of onset in pediatric and adult patients younger than 35 years, compared to other age groups.

We performed a retrospective chart review of all patients with positive MPO or PR3 lab results by ELISA and a diagnosis of vasculitis from 2000 to 2017. Patients were classified into four groups according to age and divided into two groups each depending on MPO or PR3 serotypes. These features were compared to one another through descriptive statistics, as noted in table 1.

141 patients were identified based on the inclusion criteria, of which 31 were below the age of 35. The majority of patients were white females. Upper respiratory tract involvement and arthritis were much more common in the pediatric and adults younger than 35. PR3 was also more frequent in this group as well. Renal and lower respiratory involvement were comparable between the age groups.

Onset of AAV in young adulthood has distinct characteristics that more closely resemble pediatric AAV than compared to their older counterparts. Prior literature demonstrates a much higher percentage of extra-renal, extra-respiratory involvement in the pediatric population, which is consistent in our sample as well. Further analysis on clinical presentation, prognosis and treatment outcomes are forthcoming. 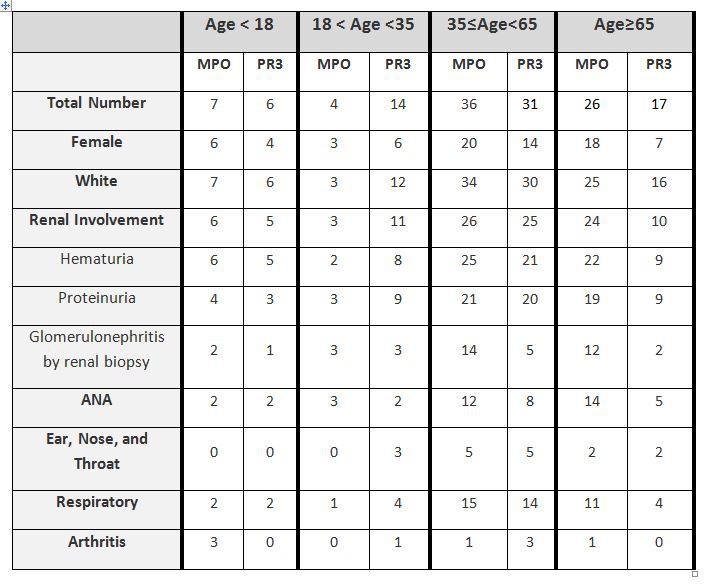