Hematuria, proteinuria and increase in serum creatinine are noninvasive but inaccurate indicators of active GN. Renal biopsy is the gold standard for diagnosis of active GN but recurrent biopsies can be laden with risk. We aimed to ascertain if urinary cell mRNA profiling could be used to differentiate active versus remission phase in ANCA GN

Patients with biopsy proven ANCA GN were enrolled and activity was scored using BVAS. Patients in active phase had urine sample collected at the time of diagnostic biopsy and remission samples were collected during remission phase with a BVAS of zero. Total RNA was isolated from the urinary cells and mRNA expression of specific genes was examined by reverse transcription and PCR. We measured urinary cell levels of 19 mRNA’s encoding proteins implicated in innate and adaptive autoimmunity. The levels of mRNA in the urinary cells for each sample were normalized by the levels of 18S rRNA in the same sample. Mann-Whitney U test and AUC were used to evaluate the ability of mRNA’s to discriminate between groups

Eleven patients with active disease and 17 in remission were enrolled. There were no significant differences between the groups with respect to age and ANCA subtype. Urinary expression of mRNA’s for the cytotoxic attack molecules Perforin (p=0.001) and Granzyme B (p=0.02), B cell CD20 (p=0.012), Vimentin (p=0.0068), and RANTES (p=0.5) was significantly higher in active disease group compared to remission group. There were no significant differences between the groups for mRNA’s encoding TGFβ1, FOX-3,CD25,Tbet,CD3GB,MCP1,MIG,C3,CXCR3,E-cad,NKCC2,VEGF,CD46 and IP10. ROC curve analysis demonstrates these markers can discriminate vasculitic activity (Image1)

This study demonstrates that urine mRNA profiling may be a non-invasive method of monitoring disease activity in ANCA GN. Elevated levels of perforin, granzyme B and CD20 are consistent with the role of cytotoxic T cells and B cells in ANCA GN 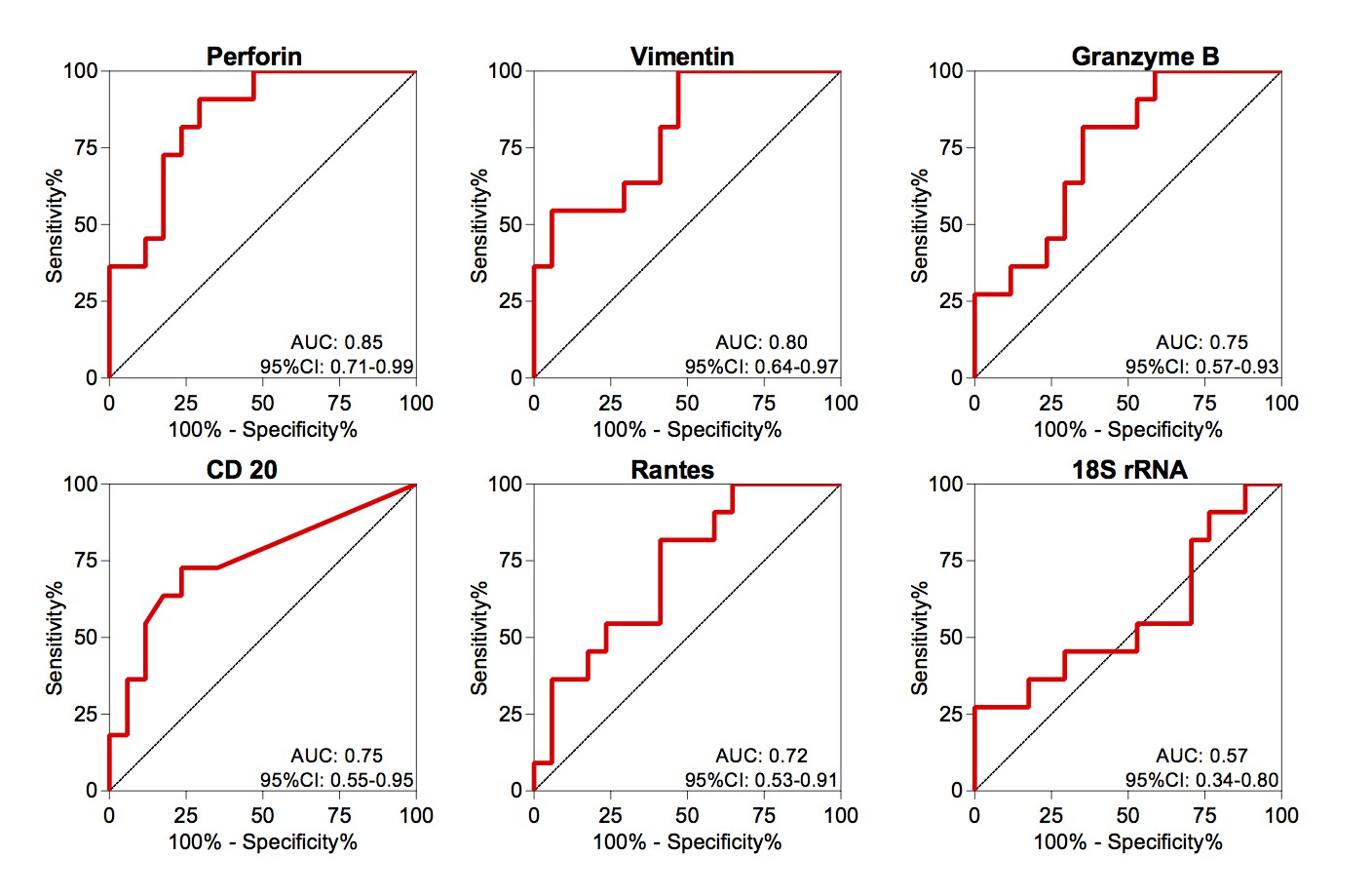