BK virus (BKV) is a ubiquitous polyomavirus which can result in up to 10% of kidney transplant recipients to develop BKV-associated nephropathy and organ loss. As no antivirals are available, the current treatment is reduction of immunosuppression which can risk organ rejection. An active antiviral capable of reducing viral burden while maintaining immunosuppression could have a substantial impact on the survival of existing kidney grafts and avoid re-transplantation. BCV is a lipid conjugated nucleotide analog of cidofovir (CDV) with potent antiviral activity against BKV in vitro (EC50= 0.02 uM) without CDV-associated nephrotoxicity. In this acute infection-treatment model study, we assessed the antiviral activity of BCV against MuPyV which infects the kidney.

Twenty-seven C57BL/6 mice (8–12 weeks old) were assigned to one of three treatment groups (n=6/group) or three corresponding placebo groups (n=3/group). For the treatment groups, BCV 80 mg/kg was delivered over a one-week period as a single dose or through divided doses: BCV 80mg/kg IP on Day 1; BCV 40mg/kg IP on Days 1 and 4; or BCV ~13 mg/kg IP on Days 1-6. Mice were inoculated in hind footpads with 1.0 × 106 PFU of MuPyV on Day 1. qPCR of kidney and spleen were performed at Day 7. Placebo groups were pooled for analysis.

BCV reduced the viral load in the kidneys of mice acutely infected with MuPyV in this model. Further evaluation of BCV activity in immunocompromised mice with chronic MuPyV is planned to further explore BCV as a potential treatment for BKV. 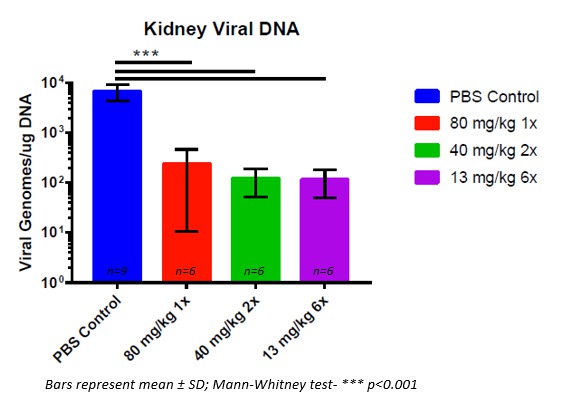