The mucosal immune system plays a role in the pathogenesis of Immunoglobulin A nephropathy (IgAN). Previously, the gut microbiota was proved to be essential to develop the IgAN in mice model. However, little has been known about the relationship between IgAN and the intestinal microbiome in human.

We enrolled 41 biopsy-proven IgAN patients at 3 centers and collected fecal specimens at the time of renal biopsy. Feces from 36 patients with biopsy-proven membranous nephropathy (MN) or diabetic nephropathy (DMN) were used as disease control (DC) and from 35 healthy volunteers as healthy control (HC). The composition of the microbiota was analyzed using extracted metagenomic DNA from the feces by Illumina MiSeq system.

The estimated glomerular filtration rates (eGFR), which represents the renal function, were 106, 74 and 71 mL/min/1.73m2 for HC, DC, and IgAN group, respectively. The Shannon diversity index did not differ among the 3 groups. Beta-diversity were plotted using principal coordinate analysis, which showed separation of IgAN from HC and DC groups.
At phylum level, the relative abundances of Firmicutes and Acinetobacteria were higher, whereas those of Bacteroidetes and Proteobacteria were lower in IgAN patients than HC, DC groups. When we divided DC group into 21 patients with MN and 15 patients with DMN, the results from a comparison of 4 groups still showed IgAN specific character. At genus level, the number of the significantly different genus was 7 between HC and DC, 24 between HC and IgAN, and 28 between DC and IgAN.
When IgAN patients were divided into two groups on the basis of eGFR 60 mL/min/1.73m2 or 3g/day of proteinuria, the bacterial composition did not differ between groups.

The fecal microbiota of IgAN differed from those of healthy and disease control. We could tell the microbial difference of IgAN was not due to renal function but the IgAN-specific factor. For further investigation, shotgun metagenomic DNA sequencing is undergoing to characterize the functional genes of microbiota. 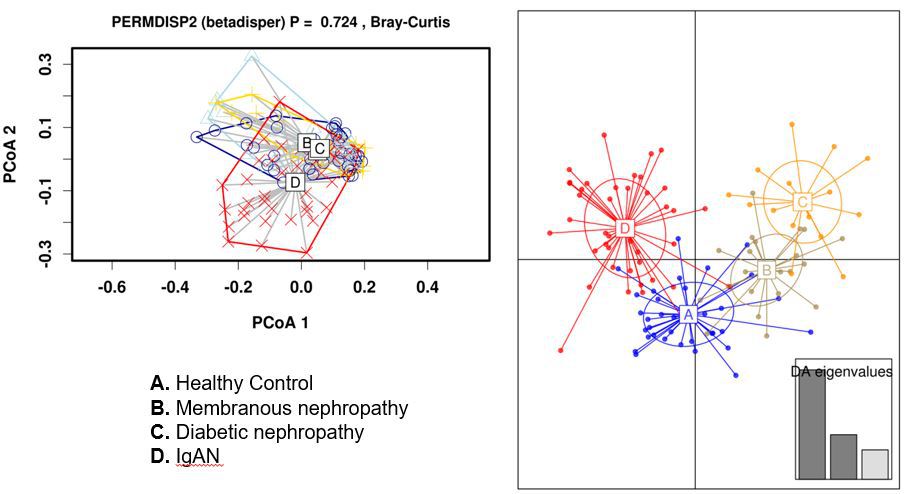