Does Glucose Control Influence the Effect of Empagliflozin on Kidney Outcomes in Type 2 Diabetes (T2D)? Insights from the EMPA-REG OUTCOME® Trial

Does Glucose Control Influence the Effect of Empagliflozin on Kidney Outcomes in Type 2 Diabetes (T2D)? Insights from the EMPA-REG OUTCOME® Trial

In the EMPA-REG OUTCOME® trial, empagliflozin (EMPA), a selective SGLT2 inhibitor given in addition to standard of care, significantly reduced pre-specified kidney outcomes by 39% in T2D patients with established cardiovascular disease (CVD). There is evidence that intensified glycemic control in T2D prevents microvascular complications including progression of kidney disease. We sought to determine whether the renal benefits of EMPA were linked to its effect on HbA1c.

Patients were randomized (1:1:1) to EMPA 10 mg, EMPA 25 mg, or placebo (PBO). Background glucose-lowering therapy was to remain unchanged for the first 12 weeks. Kidney outcomes were analyzed in the pooled EMPA group vs PBO after adjustment by baseline HbA1c, for HbA1c control during the trial as a time-dependent factor, and by reduction in HbA1c from baseline to week 12. Differences in risk between treatment groups were assessed using a Cox proportional hazards model.

A total of 7020 patients were treated. Median observation time was 3.1 years. The reduction in risk of incident or worsening nephropathy with EMPA vs PBO was found to be consistent irrespective of either HbA1c at baseline or subsequent changes in glycemic control during active study treatment (Figure).

In patients with T2D and established CVD, the beneficial effect of EMPA on kidney outcomes was consistent irrespective of HbA1c prior to and during therapy. EMPA-KIDNEY, the outcome study of heart and kidney protection with EMPA, will provide additional insights into potential glycemia-independent kidney effects of EMPA in patients with and without diabetes. 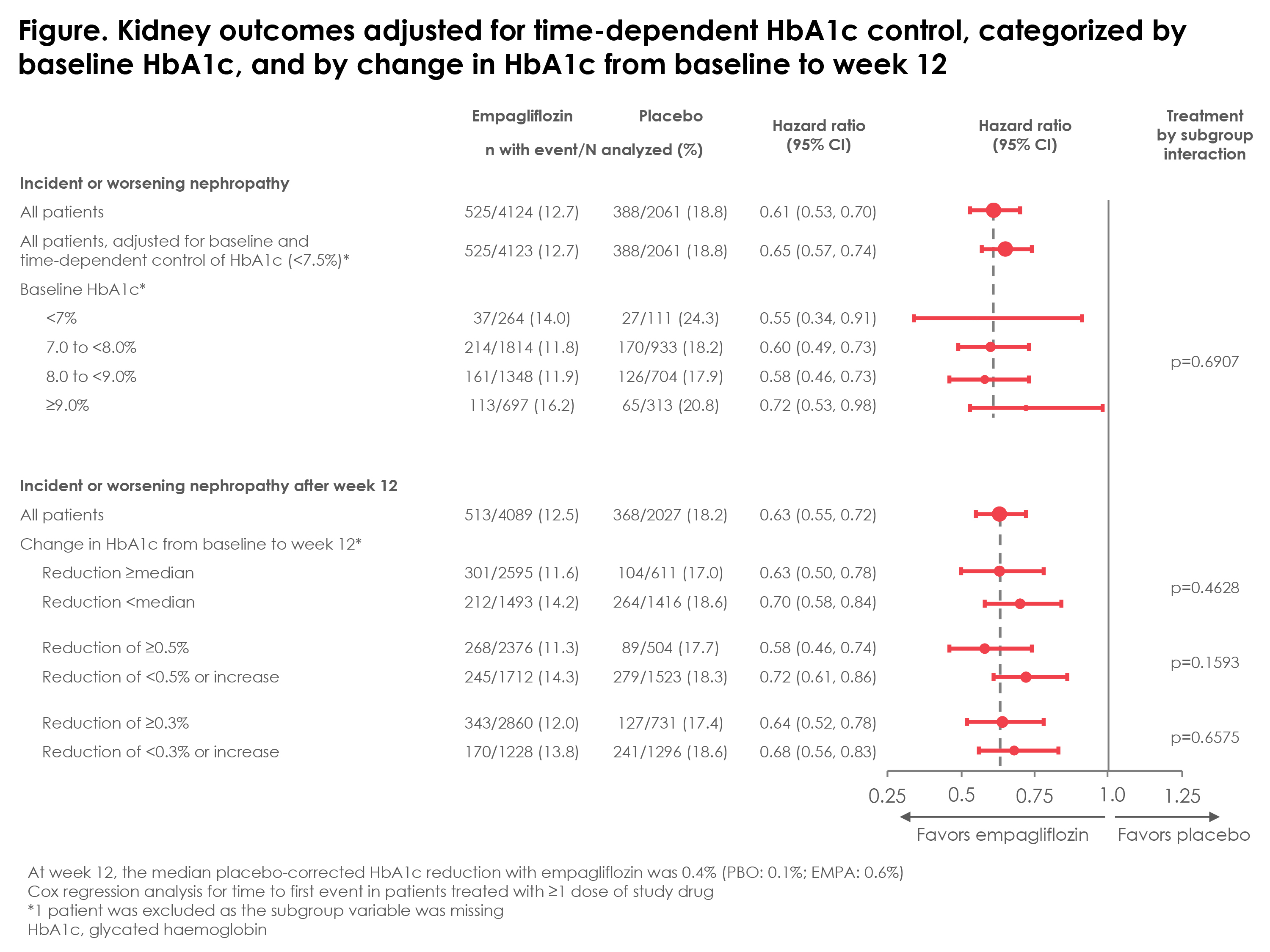