Incidence and Mortality of Cancers Among ESRD Patients Receiving Hemodialysis or Peritoneal Dialysis: A National Cohort Study in Korea

Incidence and Mortality of Cancers Among ESRD Patients Receiving Hemodialysis or Peritoneal Dialysis: A National Cohort Study in Korea

Patients with end-stage renal disease (ESRD) have a higher-than-normal cancer risk. However, the incidence and mortality of cancers in ESRD patients receiving hemodialysis (HD) or peritoneal dialysis (PD) have been rarely studied for Korean populations.

We analysed data from the National Health Insurance Service (NHIS) of Korea to identify the incidence and mortality of cancers in ESRD patients receiving HD or PD. The study population was all ESRD patients starting maintenance dialysis between 2006 and 2014. They were followed from initiation of dialysis until death, discontinuation of dialysis, or the end of 2015. Cox proportional hazard regression models was used to identify the risk factors for cancer in ESRD patients.

These results suggested that the frequency of cancer is higher in ESRD patients on HD, not PD, than in the Korean general population. 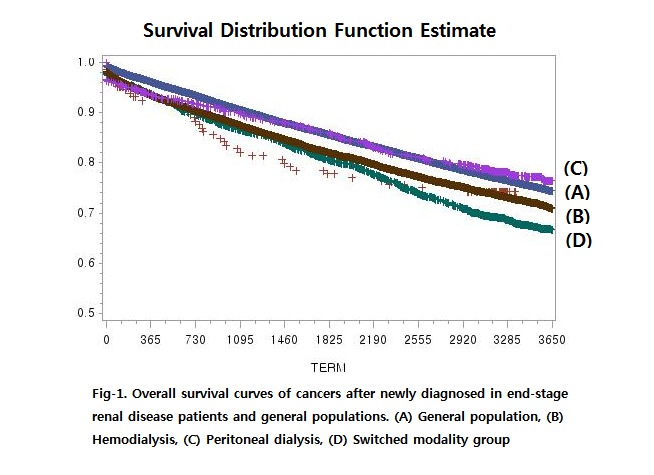