Monocyte aggregation and giant cell formation occurred following stimulation with both aPR3 and iPR3 with a greater number (p<0.01) and size of aggregates (p<0.001) in GPA patients compared to MPA patients and HC. Typical granuloma were observed using PBMC preparations with a greater number (p<0.001) and size (p<0.001) of aggregates seen in GPA patients. There was no significant difference between aPR3 or iPR3. No effect was seen with MPO. Supernatant profiling implicated specific roles for pro-inflammatory cytokines. In zebrafish (n=9/group), both aPR3 and iPR3 were associated with a significant increase in cell fusion and aggregate volume (p<0.001) when compared to albumin injected controls (figure).

These models support a role for PR3 in promoting monocyte and macrophage fusion and granuloma formation in vitro and in vivo, and provide an opportunity to test specific therapeutics. 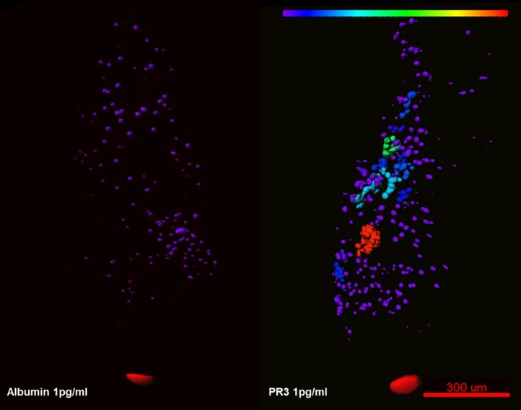