Accuracy of Nephrologist in Identifying Kidney Disorders Prior to Kidney Biopsy

Accuracy of Nephrologist in Identifying Kidney Disorders Prior to Kidney Biopsy

New biomarkers have been developed for identification of kidney diseases; however the kidney biopsies remain the gold standard in diagnosis and management. Our aim was to determine the ability of nephrologist to accurately identify etiology of kidney dysfunction prior to a biopsy.

This is a retrospective cohort study of 251 patients who underwent a native kidney biopsy at Mount Sinai Hospital (MSH) and Albany Medical Center (AMC) from 2013 - 2017. Clinical indication and nephrologist diagnosis was determined by review of pre-biopsy provider notes while final diagnoses were determined by review of biopsy pathology reports.

There were 251 patients who underwent kidney biopsy; mean age was 51 ± 16 years, 52% were male, 50% were inpatient, and 60% were done under ultrasound guidance. The most frequent indication for biopsy was non-nephrotic range proteinuria, 83 (33.2%) and acute kidney injury, 79 (32%). We were able to identify the nephrologist pre-biopsy diagnosis in only 93 patients. The most frequent diagnoses were diabetic nephropathy (20%), ANCA vasculitis (12%), and membranous nephropathy (8%). The post-biopsy diagnosis matched 45% of the time; the highest concordance was seen in diabetic nephropathy (32/39) and IgA nephropathy (10/11) while the lowest concordance seen in ANCA (6/21), FSGS (2/12), and minimal change (2/7). There was no consistent alternative diagnosis in the lowest concordance groups; patients who were biopsied with a presumptive diagnosis of ANCA were found to have diabetic nephropathy, HSP, and MPGN among others on pathology.

Nephrologists were able to accurately identify underlying etiologies nearly half the time in patients who were referred for biopsy. Given the relative safety of kidney biopsies, we should have a low threshold to refer patients for kidney biopsies. 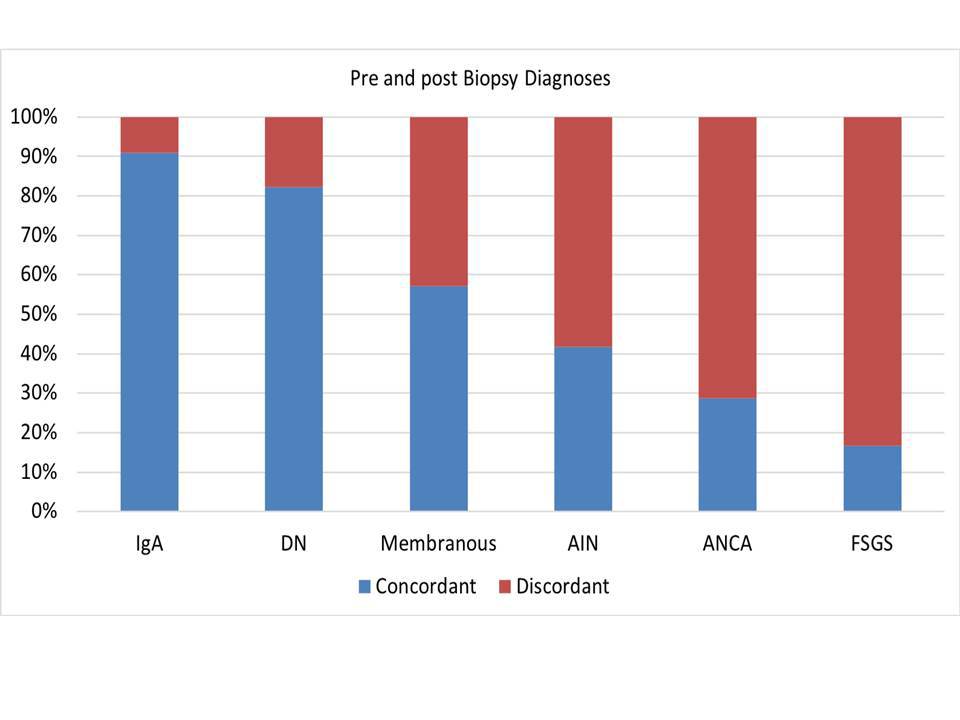