Icodextrin (ICO) is a polyglucose peritoneal dialysis (PD) solution used in the long dwell. It is known to produce a mild dilutional hyponatremia due to its absorption and metabolism to maltose. In our program, many patients are treated with a single ICO dwell overnight as part of an incremental PD approach. We hypothesized that these patients are more likely to develop ICO induced hyponatremia due to decreased peritoneal clearance of maltose.

We performed a cross sectional analysis of our prevalent PD patients treated with ICO to determine the predictors of a significant (≥ 5 mmol/L) drop in serum sodium (Na) after ICO initiation. From our electronic database, demographic and biochemical information was abstracted. Serum Na values immediately before and a minimum of two weeks post ICO initation were compared.

107 of 193 prevalent patients had at least once ICO exposure and 98 patients had pre/post Na values and were included. Predictors of a significant drop in Na are shown in the table. When age and modality were entered into a regression model, the adjusted OR for hyponatremia with single ICO exchange was 1.88 (CI 1.16 to 3.13, P=0.01) compared with a single ICO and full CAPD or CCPD.

We conclude that use of a single overnight ICO exchange is associated with a significantly higher risk of hyponatremia than when ICO is used as part of a full CAPD or CCPD regime. This suggests that peritoneal clearance of maltose is important in attenuating the apparent drop in serum sodium with ICO. Further prospective studies are needed to validate this concept. 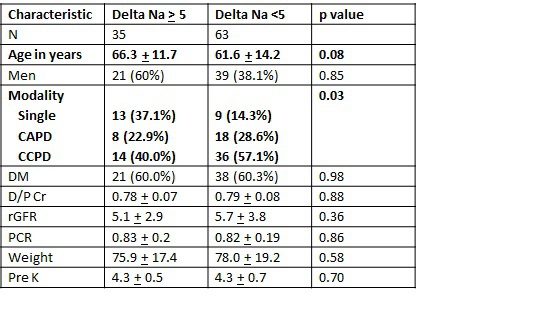