Apolipoprotein L1 (APOL1) is a gene expressed only in humans and some primates. Its genetic variants (G1 and G2) are strongly associated with kidney diseases including non-diabetic kidney disease, FSGS, and HIVAN. The mechanism leading to APOL1 nephropathy remains unclear partly due to inadequate animal models that can recapitulate the events leading to human disease.

We generated non-isogenic and isogenic iPSC lines for wild type APOL1 (G0) and risk variants (G1, G2) using dermal fibroblasts reprogrammed with Sendai virus. Kidney organoids were generated using the protocol established by Takasato et al. (Nat Protoc. 2016, 11:1681-92). RNA-sequencing was performed on differentiated kidney organoids day 28 with and without interferon (IFN)-gamma. After QC and adaptor trimming, reads were mapped to the reference genome with STAR aligner and then analyzed in EdgeR. Network analysis was performed with Metacore.

As expected, iPSCs from different sources had variable characteristics in terms of rate of cell division, ability to differentiate and to form kidney organoids but we were able to select representative, comparable iPSC lines for the generation of kidney organoids. Our APOL1 kidney organoid model demonstrated expected localization of APOL1 to podocytes and proximal tubules and appropriately upregulate interferon stimulated genes when treated with IFN-gamma. APOL1 was equally expressed across the genotype groups. Gene enrichment analysis was notable for transcription changes in HIF1 targets in the risk variants compared with the wild type group.

Our human iPSC derived model for APOL1 nephropathy will be used to further characterize the APOL1 genetic variants. We now have a robust model that will serve as a platform for understanding the mechanisms that lead to disease, drug testing and potential cell therapies. 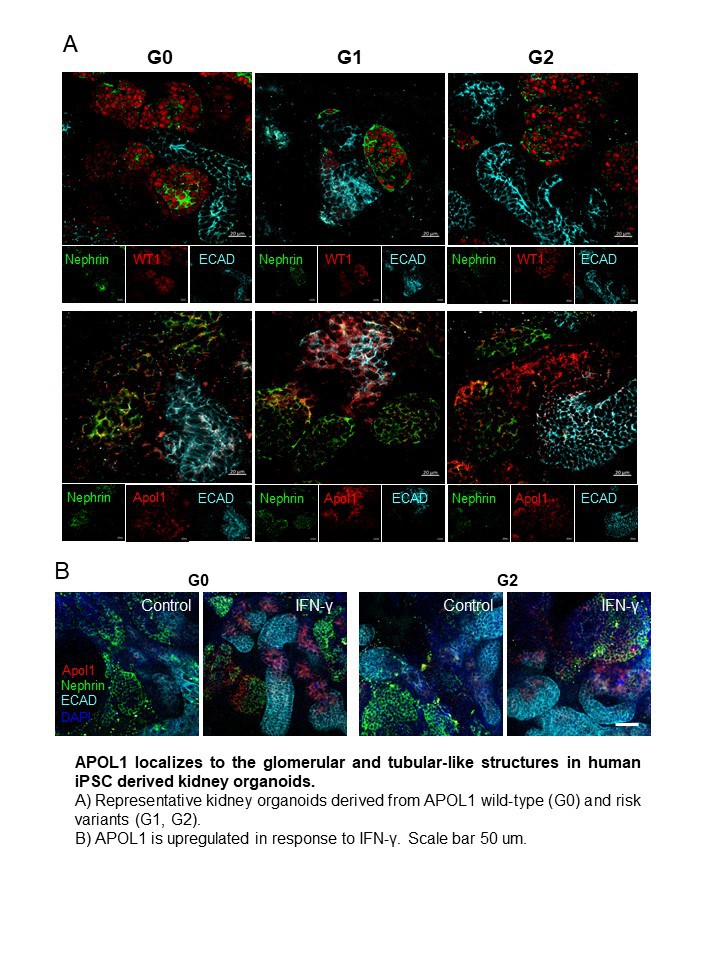