Atypical hemolytic uremic syndrome(aHUS) has been associated with high risk for recurrence after kidney transplantation. In 2017, a consensus report on aHUS was published by KDIGO working group whereby eculizumab prophylaxis should be recommended in renal transplantation. However,it has recently been described the potential benefits from living kidney donors and low tacrolimus use to minimize recurrence rates in aSHU, thereby averting endothelial injury.
Here we report two cases of successful deceased donor kidney transplantation in atypical hemolytic uremic syndrome without preemptive eculizumab treatment.

They are a 58 and 46-yr old women with a history of CKD stage V in hemodialysis due to aHUS diagnosed in 1991 and 1993 respectively. The first one showed a total complement factor I(CFI)deficiency of 100% (mutation c.-173C>T),whereas in the second case, a complement factor B mutation (c.858C>G) was identified.
Both underwent renal transplantation from cadaveric donor, sharing two HLA identities(class I and II) in each case.Cold ischemia time (CIT) were of 19h18' and 23h30’,respectively. Our immunosuppressive strategy, based on preemptive plasmapheresis, is depicted in the attached image.
The clinical course was uneventful, without hemodialysis requirements nor biochemical microangiopathic anemia signs.
Actually, they show a normal renal function under tacrolimus (5-6pg/L),mycophenolate and steroid treatment, one month and four years after transplantation, respectively.

According to our experience, preemptive plasma therapy could be effective in the prevention of disease recurrence in patients with high risk mutations with deceased kidney donors and long CIT.
We need more evidence to define risk groups and tailor current treatments to each case to make better cost-effective decisions. 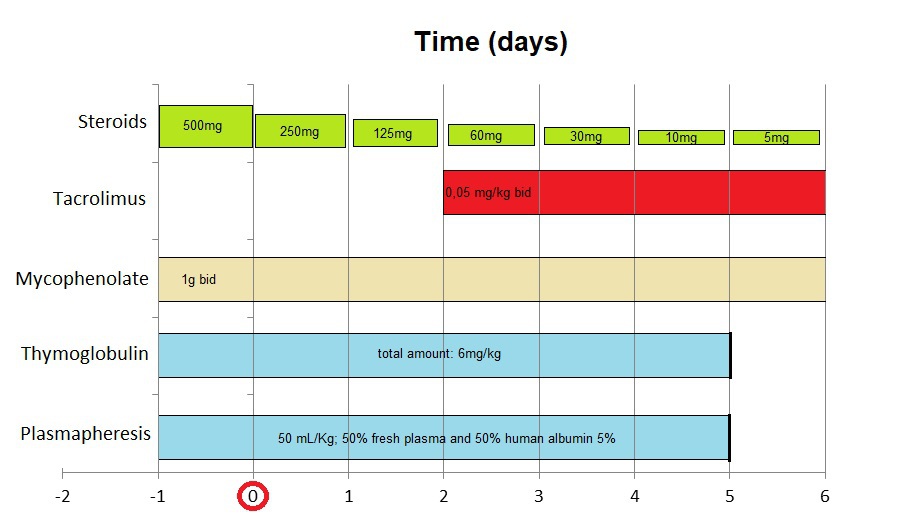