Dihydropyridine calcium channel blockers (DHP-CCB) are first-line blood pressure agents that promote systemic vasodilation. In the kidney, they disproportionality vasodilate the afferent arteriole relative to the efferent arteriole, which poses a risk of glomerular hypertension and consequent albuminuria. For this reason, the amlodipine arm was halted early in the African American Study of Kidney Disease and Hypertension. However, DHP-CCBs remain commonly used, and few real-world studies have examined the development albuminuria with DHP-CCB use. Therefore, we sought to measure the association of DHP-CCBs with incident albuminuria compared to beta blockers, an active comparator not known to affect albuminuria.

Compared to beta blockers, DHP-CCB use was associated with increased risk of incident albuminuria in a community cohort. 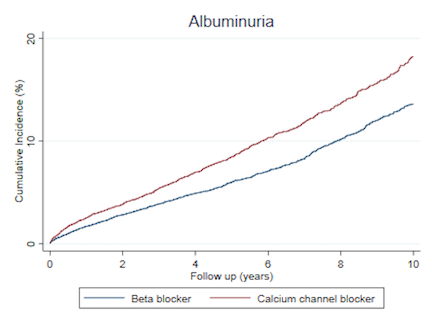 Cumulative incidence of albuminuria in DHP-CCB vs beta blocker use