Complement plays an important role in Post Infectious Glomerulonephritis (PIGN) and C3 glomerulonephritis (C3GN). Both PIGN and C3GN are characterized by a proliferative GN on light microscopy and bright staining for C3 on immunofluorescence studies and are difficult to distinguish on kidney biopsy. However, the etiology, pathogenesis and treatment are different for PIGN and C3GN. Given the limitations of routine kidney biopsy, we performed laser microdissection followed by mass spectrometry (MS) analysis to determine whether glomerular complement profiles are different in PIGN and C3GN.

Complement protein profiles were analyzed in patients with PIGN (n=8) and C3GN (n=9). Glomeruli (8-10 per biopsy) were laser microdissected and dissected fragments were digested into tryptic peptides and analyzed by MS. For each case 2 samples were analyzed. A list of proteins was generated and peptide identifications were accepted if greater than 90% probability by the Peptide Prophet algorithm was established. The Total spectral counts (TSC) of complement proteins of the alternative and terminal pathways (C3, C5-C9), regulatory proteins (CFH, CFHR1-5) and classical/lectin pathways (C4A, C4B) were compared between the two groups.

Glomeruli of C3GN express significantly higher levels of C3, C5-C9, and CFH when compared to PIGN . These studies show that burden of alternative and terminal complement pathway proteins is much higher in C3GN compared to PIGN, suggesting a greater role for anti-complement therapy in C3GN. 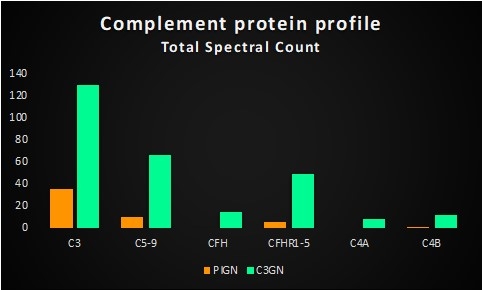