Use of Narsoplimab in a Paediatric Patient With IgA Nephropathy

Use of Narsoplimab in a Paediatric Patient With IgA Nephropathy

Narsoplimab is an investigational fully human mAb targeting MASP-2, the effector enzyme of the lectin pathway of the complement system. We report the first example of narsoplimab in a paediatric patient with IgA nephropathy (IgAN).

An 8-year-old girl presented in 2013 with history of macroscopic haematuria, proteinuria (urine albumin:creatinine ratio [UACR] 81 mg/mmol Cr) and a transient decline in estimated glomerular filtration rate (eGFR). IgAN was diagnosed with histological features of focal proliferative glomerulonephritis and IgA deposition. She received corticosteroids, mycophenolate mofetil, an ACE inhibitor and ran a relapsing, remitting course (Fig). In 2021 at age 16, there was an irreversible decline in renal function and rise in proteinuria. Renal biopsy demonstrated 70% global sclerosis (M1, E0, S1, T1, C1). Due to declining renal function, persisting active inflammation and promising adult studies, compassionate use narsoplimab was provided and administered by IV infusion over 30 min once a week. The patient was observed for 30 min after each infusion with weekly surveillance tests to detect adverse events. She received 9 of 12 planned doses between Dec 2021 and Feb 2022. Dose 7 was omitted due to intercurrent febrile illness and the final 2 doses were omitted to focus on preparation for renal replacement therapy. All 9 doses were well tolerated with no adverse events. Narsoplimab did not appear to influence renal function (eGFR dropped from 36 to 24 ml/min/1.73m2) but demonstrated a dramatic reduction in proteinuria (425 to 157 mm/mmol Cr) similar to adult trials (Lafayette et al. KI Rep. 2020;5:11).

This is the first report of complement inhibition for paediatric IgAN. Narsoplimab was well tolerated and dramatically improved proteinuria. Irreversible histological features of resistant IgAN may have impacted narsoplimab use in this patient warranting earlier intervention. Studies into efficacy of narsoplimab in children with IgAN are required. 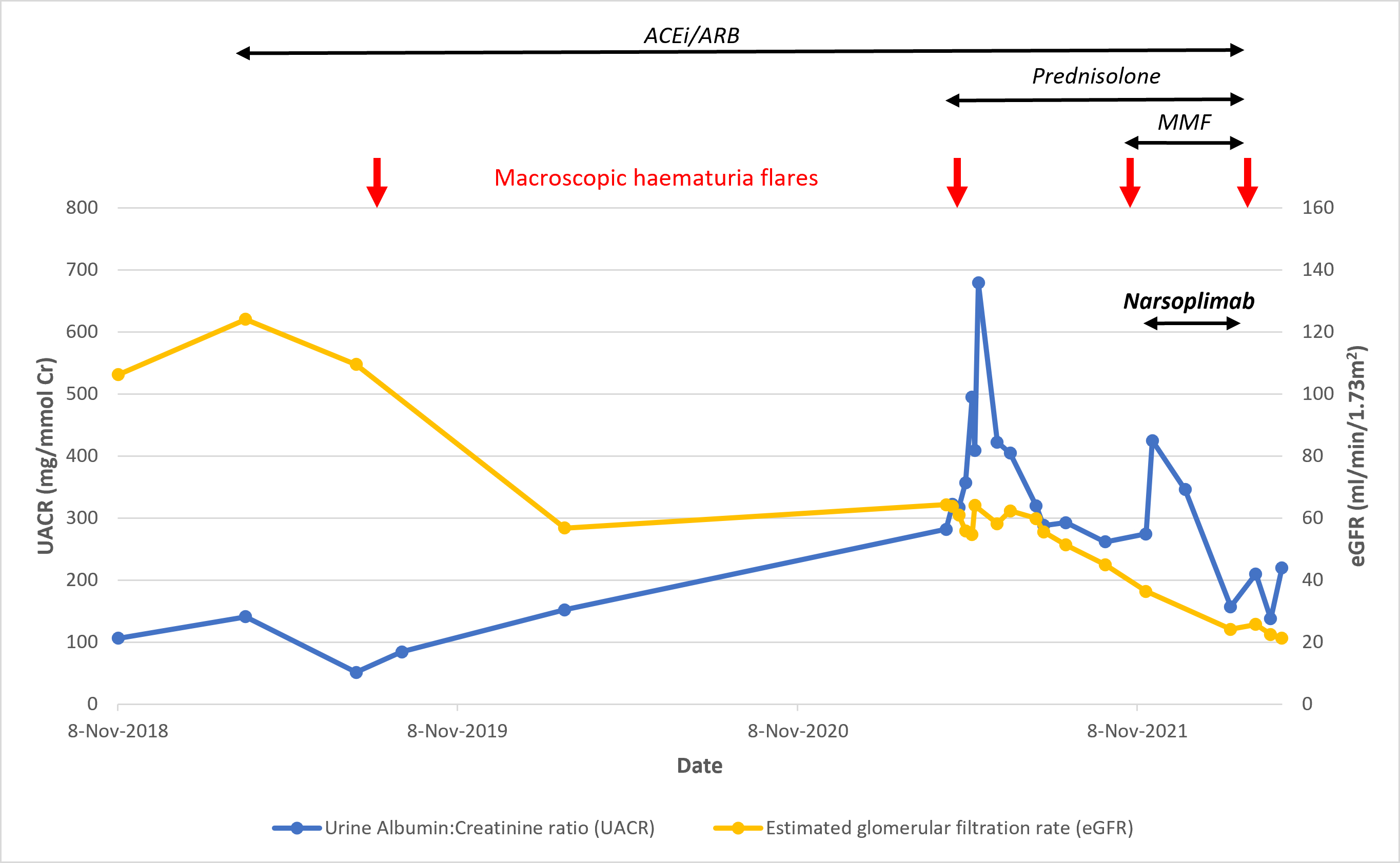