Seven-Year Follow-Up in a Population at Risk of Mesoamerican Nephropathy: Associations With Early Evidence of Kidney Injury and Incident CKD

Seven-Year Follow-Up in a Population at Risk of Mesoamerican Nephropathy: Associations With Early Evidence of Kidney Injury and Incident CKD

Mesoamerican Nephropathy (MeN) is a leading contributor to premature mortality in Central America but the primary cause remains unclear. Early disease is challenging to identify given absent urinary abnormalities and variation in eGFR within and between healthy individuals. We explored the incidence of CKD as well as evidence of early kidney injury (EKI) in the at-risk population from NW Nicargaua.

We conducted a community-based study of 2 cohorts (n=351 and 420) of adults aged 18-30, collecting questionnaire data, and bi-annual/annual eGFR measures for 7 and 4 years follow-up respectively. We used Hidden Markov Modelling to estimate EKI, the point of sustained departure from the healthy eGFR distribution, and examined associations between time-updated exposures and both incident CKD and EKI using Cox-proportional hazards and fractional regression respectively.

CKD occured in men only (incidence rates of 0.8%/year and 0.5%/year in the two cohorts). 14% of men and 3% of women experienced EKI. Cumulutive time spent in sugarcane work and symptoms of excess occupational sun exposure associated with incident CKD. Other risk factors associated with EKI (Table). Weight loss and cramps remained independently associated with EKI in multivariable models.

CKD burden in this population is high. Risk factors for established disease are occupational but a symptom constellation suggesting an alternative exposure is associated with EKI, supporting separate initiating and exacerbating factors in MeN. The initiating factor remains unknown, but identifying epsiodes of EKI may facilitate efforts to uncover it. Meanwhile interventions to reduce the impact of exacerbating factors should be vigorously pursued. 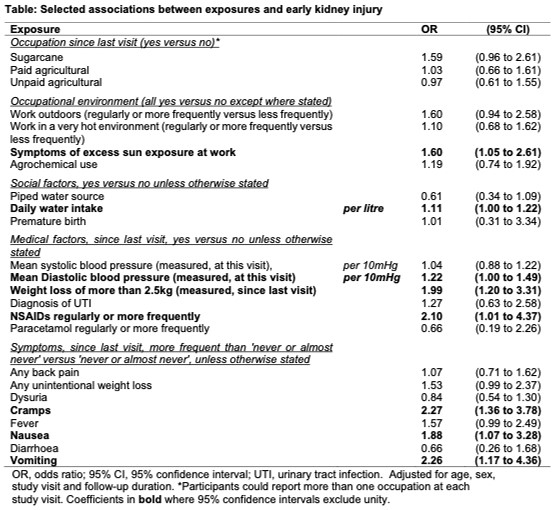