While hyperkalemia (HK) is often a chronic condition, short-term and intermittent treatment of potassium binders (PB) has been largely applied to control the serum potassium (S-K) level. In this study we investigated the impact of the long-term and chronic PB treatment on the clinical outcomes.

A retrospective observational study using a Japanese hospital-based claim database (April 2008–September 2018) was conducted. HK was defined as at least two S-K ≥5.1 mmol/L within a 12-months (M) interval. The index date was defined as initial PB prescription date and S-K values were examined at 3M, 6M and 12M after the index. Medication possession ratio (MPR), which is usually used for adherence measures, was used to evaluate the proportion of a time period where PB were prescribed since no prescription refill is allowed in Japan. Clinical outcomes were analyzed by comparing HK patients with MPR ≥ 80% to those < 80% using Cox proportional hazards regression analysis. 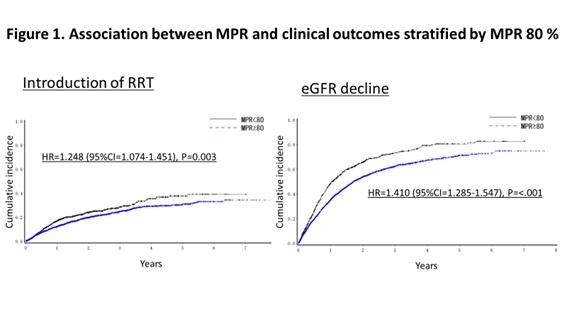