We identified robust urinary Complement-enriched proteomics profiles that were associated with 10-year ESKD risk in a prospective Joslin Kidney Study cohort with overt diabetic kidney disease (DKD). The role of the Complement pathway in early stages of the disease process remains unknown. This study evaluated the associations of Complement proteins and early DKD in T1D.

In the univariable logistic models, more than a dozen Complement proteins were associated with eGFR decline. Odds of developing eGFR decline per one tertile increase in the distribution of CFP the top Complement protein was: OR (95%CI): 2.5 (1.8, 3.6); p<10-6. The proteins represented all major components of the Complement pathway. Most of the proteins remained significant after adjustment for select clinical covariates. Albuminuria substantially impacted the Complement associations (changes in beta estimates: from 23-40%). The effect size in the principal component (PCA)-based model was larger in comparison with other models using individual proteins (Fig.1).

Our study of subjects with T1D and mild to moderate DKD demonstrated that Complement proteins are associated with kidney function decline over a 3-year period. These new findings suggest that the Complement pathway may play a role at earlier stages of disease process than previously assumed. 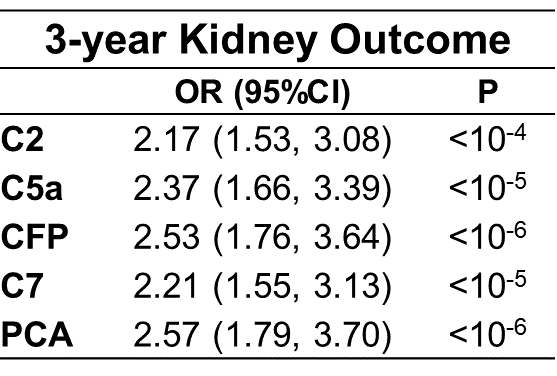