24-hour urine from metabolic balance studies in 13 healthy males on a fixed diet/kg body weight were collected for 6 days sequentially at baseline and intervention phase. Measures for each time period were pooled. We compared repeated measures of UOAE to dietary OA estimates, and NAE to NEAP.
DOA was estimated from diet unmeasured anions by Lemann; Remer used individual body surface area (BSA). Lemann used urinary measurements of SO4 and OA to calculate NEAP, while Remer used BSA (using DuBois and Mosteller formulas) and dietary calculations of SO4. UOAE was measured by titration. We determined the concordance correlation coefficient (CCC) for the repeated measures data with the King et al. U-statistics approach (Stats Med 2007). 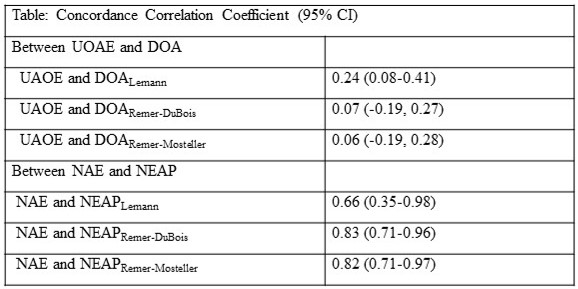