The incidence of end stage renal disease (ESRD) is higher among Blacks than other racial or ethnic groups and is up to three times higher than the non-Hispanic white population. Despite kidney transplantation having superior outcomes to dialytic therapies. the disparities in living donor kidney transplantation (LDKT) between Black and non-Hispanic white patients have persisted, even after taking into account individual differences in social determinants. Previous studies have shown that Black patients are less likely to receive a kidney transplant and living-donor transplant than white patients in the United States. I argue that using a socioecological approach should better formulate interdisciplinary and comprehensive interventions to help reduce the racial disparities in living donor kidney transplantation.

At the individual level, public insurance, income and transplant knowledge have been found to be independently associated with living donor kidney transplantation. The interpersonal/relationship factors shaping the disparities include perceived lack of social support and poor communication. Finally, cultural differences and structural inequities in our health care system including the use of race-based glomerular filtration rate calculators and transplant center variability in the screening of Black donors may also play a role.

Numerous factors at each socioecological level are likely maintaining the racial disparities witnessed in living donor kidney transplantation. A multidisciplinary and interprofessional approach is necessary to devise strategies and interventions to eliminate racial disparities and reduce inequity noted in LDKT in the United States. By utilizing a socioecological approach, we may be able to rethink how we address this important issue. 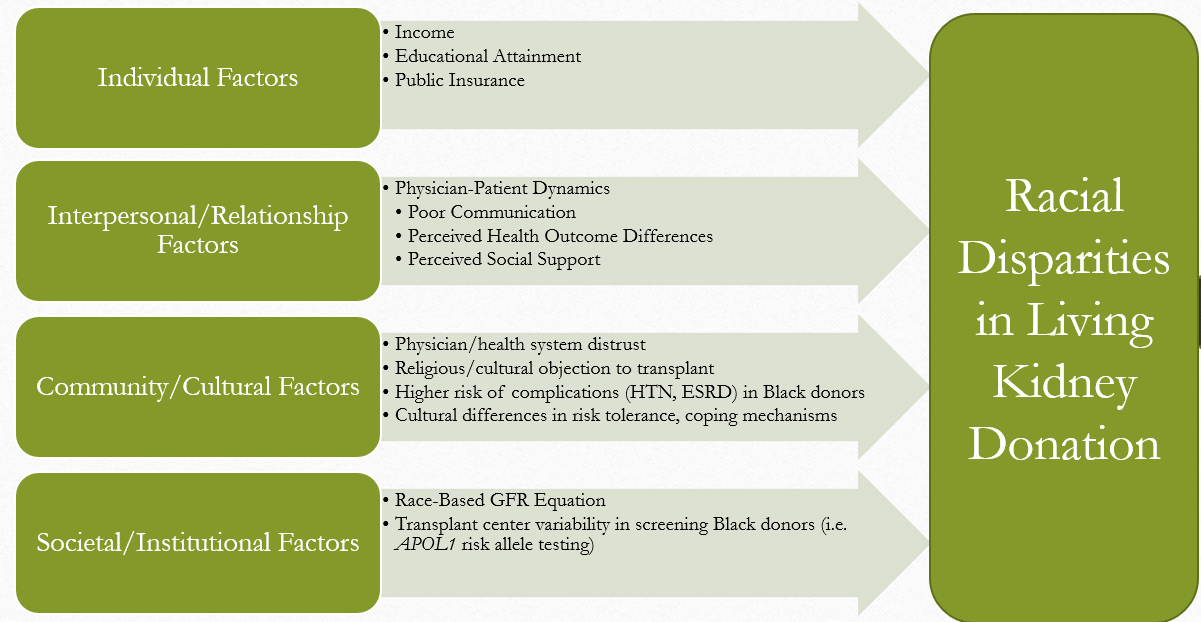