Patients with primary membranous nephropathy (PMN) are known to lose immunoglobulin in the urine at rates affected by the severity of proteinuria. This loss could impact the dosing of monoclonal antibodies used for treatment. Belimumab (BEL), an IgG1 monoclonal antibody, has been detected in the urine of patients with PMN receiving this therapy. We conducted this study to examine the relationship between serum BEL exposure and baseline proteinuria to inform dosing in PMN.

REBOOT is a two-part clinical trial examining the efficacy of BEL and rituximab therapy in PMN (NCT03949855). Part A is an open-label study examining how baseline proteinuria affects BEL exposure. Participants received subcutaneous BEL at a dose of 200 mg weekly. Serum BEL trough levels were drawn after each of the first 4 doses. The relationship between BEL exposure and baseline proteinuria was assessed using longitudinal mixed models, which included the defined low (>4 to ≤ 8 g/day) and high (≥ 8 g/day) proteinuria subgroups.

This data suggests that serum BEL exposure is not significantly associated with baseline proteinuria levels in PMN, and does not support increasing the dose of BEL in individuals with higher levels of proteinuria. 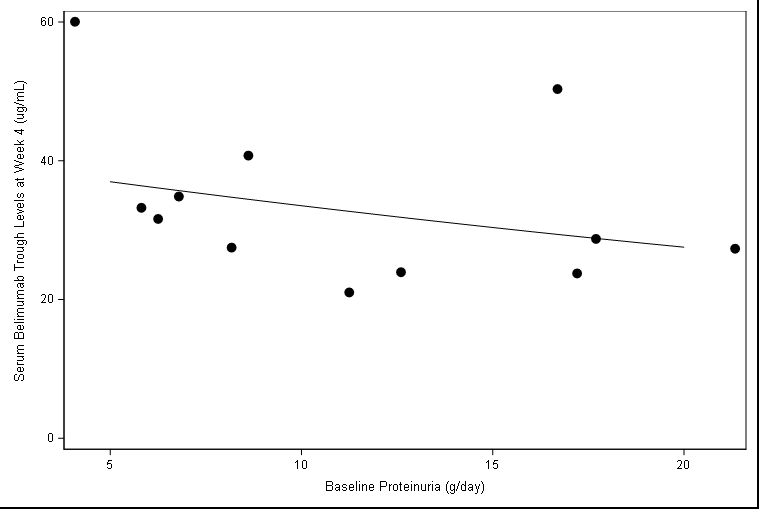