The severity and rate of progression/regression of diabetic kidney disease (DKD) are important for making clinical decisions. We examined the transitions in DKD severity stages over time in an Asian population.

The median (interquartile range) follow-up duration was 2.68 (1.08-4.29) years, and most patients had at least 3 assessments. The annual transition probability from G1-2 to G3, G3 to G4-5 in the adjusted model were 1.4%, and 1.7%, and of death from each state were 2.4%, 5.9%, and 16.4%; mean sojourn time in each state were 25.15, 5.41, and 3.93 years. Probability of regression from G3 to G1-2, and G4-5 to G3 were 9.1%, and 5.6%; DKD progression was significantly associated with older age, Malay ethnicity, DR, higher levels of HbA1c and SBP, and lower LDL-cholesterol, while regression with younger age, female gender, and lower HbA1c; Death was significantly associated with older age, male gender, longer duration of diabetes, DR, and higher levels of HbA1c and LDL-cholesterol.

Progression of DKD in people with diabetes is a gradual but steady process. Surveillance and control of blood pressure, glucose, cholesterol and DR may facilitate the management of DKD. 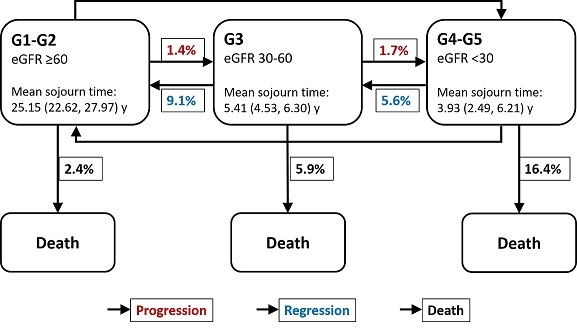