Consistent Kidney Benefits With Semaglutide vs. Placebo Regardless of Baseline Urine Albumin Creatinine Ratio in Subjects With Type 2 Diabetes at High Cardiovascular Risk: A Post Hoc Analysis of SUSTAIN 6

Consistent Kidney Benefits With Semaglutide vs. Placebo Regardless of Baseline Urine Albumin Creatinine Ratio in Subjects With Type 2 Diabetes at High Cardiovascular Risk: A Post Hoc Analysis of SUSTAIN 6

In a previous analysis of SUSTAIN 6 and PIONEER 6 (cardiovascular [CV] outcomes trials in subjects with type 2 diabetes [T2D] at high CV risk), semaglutide reduced estimated glomerular filtration rate (eGFR) slope vs placebo, both in addition to standard of care antidiabetes medication. This was most pronounced in those with eGFR <60 mL/min/1.73 m2; it is of clinical interest to understand if this benefit is consistent across urine albumin:creatinine ratio (UACR) groups. The aim of this post hoc analysis was to investigate the effects of semaglutide on eGFR slopes in subjects with different albuminuria levels at baseline in SUSTAIN 6 (PIONEER 6 was excluded as UACR was not collected in this trial).

eGFR slope estimated by a random effect model was compared in subjects by baseline UACR: <30/≥30−≤300/>300 mg/g. To account for potential differences in baseline characteristics, a sensitivity analysis was performed. These subgroups were also compared in those with baseline eGFR ≥30−<60 or ≥60 mL/min/1.73 m2.

Across the three subgroups (N=3,232), baseline characteristics were similar, except for higher blood pressure and lower eGFR in subjects with UACR >300 mg/g vs other subgroups. Overall, subjects receiving semaglutide had a slower decline in eGFR at 2 years vs placebo, an effect that was consistent across the three subgroups (p-value for interaction: 0.99; Figure). Results were consistent in the sensitivity analysis and those with eGFR ≥30−<60 vs ≥60 mL/min/1.73 m2.

Semaglutide appears to slow eGFR decline vs placebo in subjects with T2D at high CV risk regardless of baseline albuminuria status. 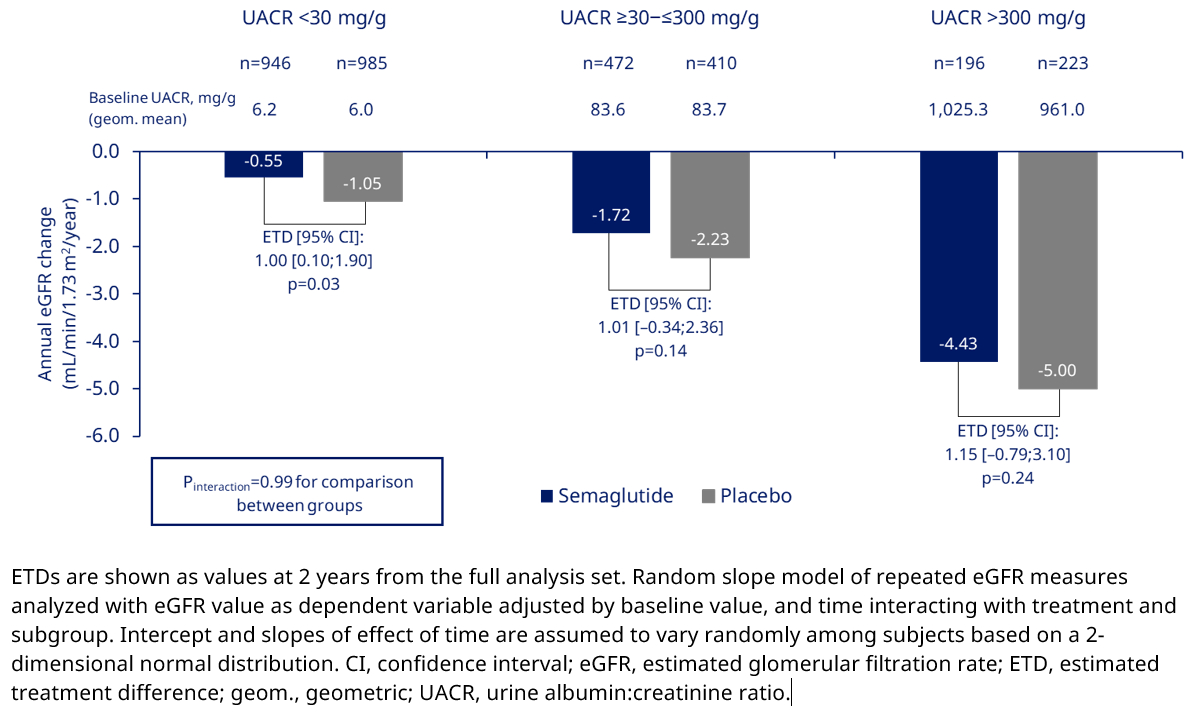