Primary IgA nephropathy (IgAN) is the most common form of glomerulonephritis worldwide and a major cause of renal failure. Here we investigate the relationship between proteinuria (PU) measured over follow-up (FU) and rate of renal function loss and renal survival in patients from the UK National Registry of Rare Kidney Diseases (RaDaR) IgAN Cohort. Since 2013, patients with biopsy-proven IgAN and eGFR <60 ml/min/1.73m2 or PU ≥0.5g/24h have been enrolled from 87 kidney units across the UK, with automated collection of retrospective and prospective laboratory data.

923 patients met the eligibility criteria, including diagnosis date, PU measurements in FU (within 2yr from diagnosis and ≥2 values if FU >3yr), no ESKD (CKD stage 5 or renal replacement therapy) or death within 6mo from diagnosis or prior to first PU value. Longitudinal PU, assessed as time-average protein-to-creatinine ratio (TA-PCR), and eGFR slope were calculated over the full duration of FU or until ESKD or death. For survival analyses, ESKD/death was applied, with survival time calculated from diagnosis to last FU.

Proteinuria exposure over time is significantly associated with disease progression and renal outcomes in IgAN. In particular, TA-PCR below 100 mg/mmol (~1g/24h) is very strongly associated with slower loss of renal function and lower risk of ESKD or death. 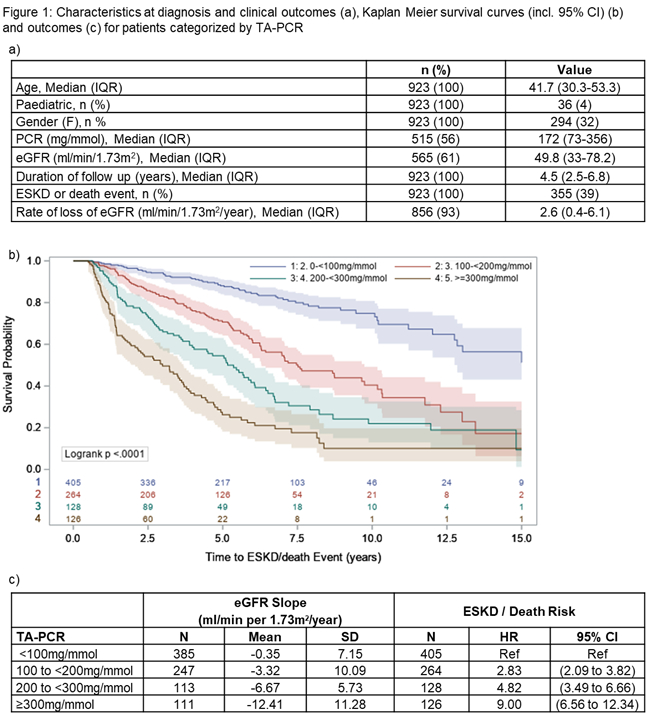