Drug toxicity is a common cause of hospital-acquired acute kidney injury (AKI), but drug-induced pseudo-AKI is rare. We present a case of pseudo-AKI from cefoxitin.

A 57-year-old man with opiate use disorder was transferred for a Mycobacterium abscessus prosthetic left hip infection. He had previously been treated for >1 month with amikacin, cefoxitin, and tigecycline with normal serum creatinine (Cr) throughout. On admission to our hospital, blood urea nitrogen (BUN) was 20 mg/dL and Cr was 0.87 mg/dL, he was continued on the same antibiotics. On hospital day (HD) 8, when Cr was 0.94 and BUN was 20, the cefoxitin was switched from 3 times daily dosing to a continuous infusion. On HD 10 his Cr jumped to 10.1 with BUN 17. When redrawn 2h later, Cr was 15.0 and BUN was 16. Nephrology was consulted and cefoxitin was stopped. Renal ultrasound and urinalysis were normal. Infectious disease suspected lab interference from cefoxitin and recommended redrawing labs from a site away from the site of cefoxitin infusion. On HD 11 his Cr returned to 0.86 and cefoxitin was resumed. Cystatin C drawn the afternoon of HD 10 eventually resulted at 0.9 mg/dL.

Most labs measure serum Cr using the kinetic alkaline picrate (Jaffe) method, which can rarely be subject to interference from other chromogens, leading to spurious elevation. Compounds known to interfere include cefoxitin, flucytosine, dexamethasone, acetoacetate (in DKA), and bilirubin (when extremely elevated). When diagnosing pseudo-AKI, the timing of drug administration and lab draw and the venipuncture site relative to the drug infusion site are important factors. Additional clues include non-physiologic rise in Cr and lack of change in other markers of renal function. With intermittently dosed cefoxitin, pseudo-AKI can be confirmed with a lab redraw after cefoxitin is eliminated (i.e., after 2-4h in normal kidney function, 6-8h in mild-to-moderate renal failure, and variable interval in severe renal failure). Though rare, this case illustrates the importance of considering pseudo-AKI in the differential diagnosis of unexplained AKI. 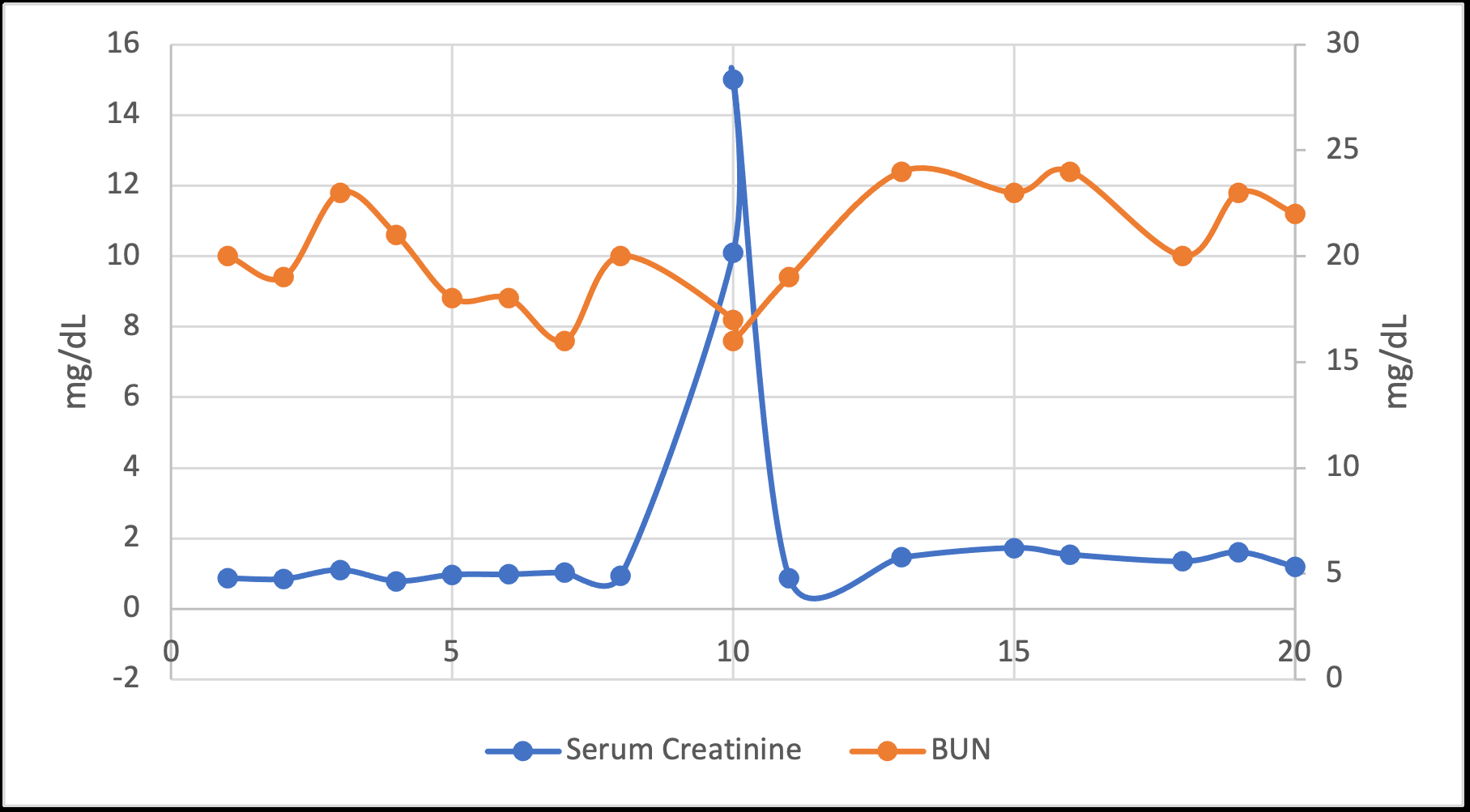