Correlation of Serum Phosphate With Pruritus Severity and Response to Difelikefalin

Correlation of Serum Phosphate With Pruritus Severity and Response to Difelikefalin

Chronic kidney disease-associated pruritus (CKD-aP) is often reported by hemodialysis (HD) patients, thought to result from inadequate serum phosphate (sP) control, but recent studies refute this. Difelikefalin (DFK) is a selective kappa opioid receptor agonist approved in the United States and Europe for treatment of moderate-to-severe pruritus in adults undergoing HD. DFK significantly reduced itch in the Phase 3 KALM-1 and -2 trials. This analysis determined the correlation of sP to pruritus severity and response to DFK.

The KALM trials enrolled HD patients with moderate-to-severe CKD-aP (mean weekly worst itch numerical rating scale (WI-NRS) >4 [KALM-1] or ≥5 [KALM-2]). Patients were randomized 1:1 to intravenous DFK 0.5 µg/kg or placebo (PBO) 3 times/week (Wk) for 12 wks. Correlation between sP and WI-NRS at baseline and Wk 12 was assessed, as well as response to DFK in patients with and without hyperphosphatemia (sP ≤5.5 vs >5.5 mg/dL) at baseline.

sP did not correlate with pruritus severity or response to DFK in patients with CKD-aP. 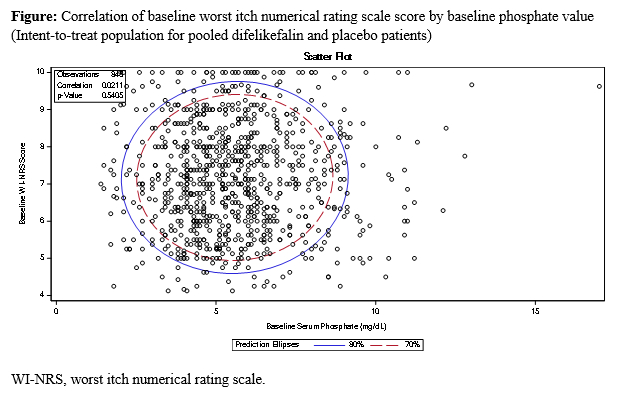